Treasury Department Second Auditors Office
August 22. 1844
The Hon. Wm. Wilkins
Secretary of War
Sir,
The claim of Wm [William] H Thomas Esqr [Esquire] for the value of provisions & clothing furnished poor & destitute Cherokees in
1836 before a disbursing agent was sent out by the government, has been received at this office from your Department, with the understanding that you decline acting thereon. Having compared it with other claims of a similar character which have been paid, & as it was approved by the Commissioners Messrs [Messieurs] Lumpkin & [deleted text: Wilson ] [added text: Kennedy ], I should have no hesitation in allowing it, but for a recommendation of the Commissioner

The limitation of the expenditure in payment of claims for provisions furnished before Gen. [unclear text: Wool ] reached the Cherokee country was made because it was represented by the Commissioners that $3000 would cover all the just demands. As there appears to be no doubt in respect to those within referred to, and as they have been in past paid, I should think there can be no objection to paying the remainder. But I recommend that no other claim of this character be paid without express authority from this Department
(Signed)
[Signed] C. A. Harris, Comr. [Commissioner]
Off. Ind. Affrs. [Office of Indian Affairs]
Mar. 26. 1838


Page: [3]
at the foot of which is written the following --
The balance due to Mrs Morgan is allowed. (signed) T. R. P.
"
In consideration of which, & as it, probably, has not before been brought to your knowledge, I have the honor to return the claim of Mr Thomas for such action as you may deem to be expedient & proper. --
I have the honor Sir, to be with great respect your Obedt Servt [Obedient Servant]
[Signed] [unclear text: W B ] Lewis

Decision of the Hon Wm B. Lewis on the claim of Wm [William ] H Thomas "says he sees no reason why it should not be paid. Therefore refers it to the Secretary of War for his authority to make payment. 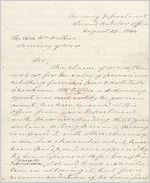