Conasauga Plains
[deleted text: May ] [added text: June ] 18th, 1840
Dear Sir
Your favour [favor] of the
30th of May was yesterday received containing fifty dollars altho [although] the sum was small was gladly receivd [received] -- you say you will send the balance in Phillidilphia Draughts if so send it to Madisonville Churchwell wrote me from Washington Cty. the letter had been broken open -- besides the letter will arive [arrive] at Madisonville in half the time it takes to reach Wolverton -- and the safest passage -- as to Jinny wolfs claim it will not be disputed by any of her connection or her self [herself] -- the claim on Mink is Just as it stands stated. The Article was given to David Mcnair [added text: for safe keeping ] who witnessed the power and Article with his daughter Miss Vann since Mcnairs death the Article was lossed [lost] the reason Mink give a large price was that Mathew W. Mcghee held an unjust claim on Mink against which claim I was to attend and defend it I done so and, prevented its being passed upon and if it stands against him it was secretly put in; the debt was between $. 300 -- 400 -- that Mcghee claimed

I want Money badly against the superior Court at Knoxville commences the first Monday of
July -- I begin to believe that the whole business is for to delay payment -- how plain it is to see there is something rong [wrong] in the whole transaction; in the Treaty of
1817 Jackson gave to each head of an Indian family 640 acres of Land for their heirs & in
1836 after some had built brick houses cleared large farms planted orchards, President Jackson tells them the [they] must remove from their farms and the Government would pay them for their Reservations they were removed at the point of the bayonet in
1838 in June -- now the month of June has arrived in
1840 and the Money not yet paid -- would you or any reasonable man continue [added text: to ] love the Administration contrary to his interest touch a mans purse and he winces.
I understand you are faithful to my business the delay is not your fault -- my calculation was that the Money would be paid Long since and made my arangements [arrangements] so to now need the money bad -- as to any difficulties ariseing [arising] it is because excuses are sought for; my claims are as well made out as my friend Gillispe


Page: [3]
and Judges Liddle & Wilson said better than Churchwells --
hold out to the end and receive the promise I sent a power for Minks money to the Hlbl. [Honorable] J. L. Williams because I was afraid you would be absent you stated sometimes like Leaving you will remember it takes a letter about a Month to come to wonverton and ten days to Madisonville 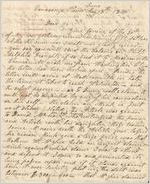