Petition of the citizens [of] Franklin County, Georgia to John Milledge, Governor of Georgia

Georgia
Franklin County
{To his Excellency John Milledge Governor and Commander in chief in & over the S [added text: t ] ate of Georgia

The petition and remonstrance of the undersigned Citizens of the state and county aforesaid most respectfully sheweth: that they have in the most deliberate and attentive manner read and considered an act of the Legeslature [Legislature] passed at their late Session entitled an Act to make distribution of the late Cession of Lands obtained from the Creek Nation by the United states Commissioners in a treaty entered into at or near Fort Wilkinson on the
16 day of June 1802.. and View with deep regret and concern that a Law should have passed at all for disposing of the said Land or territory at this time, and further that the mode of letting out the land as contemplated by the before recited Act is calculated to blast the hopes of the poor and to answer only the purpose of Welthy [Wealthy] Individuals; in support of which Several positions we assign the following reasons
First- this was not the proper time for disposing of the said Land because it is [deleted text: not ] acknowledged in the Law itself that every Citizen of the state cannot have a certain proportion or allotment of Land, the law having delared [declared] that in makeing [making] out the tickets there shall be a certain number of Blanks to a prize, if we had waited for an Accession of territory every Individual in the state could have [document damaged] result to a state of Communi [document damaged] every Citizen of such State or [document damaged] feel [deleted text: ist ] its influence and not to be placed in danger of losing hope; Secondly -- It was improper because the territory ceded is not sufficient to afford any number of Compact Counties and as the middle and Western Country as designated in the Act, cannot be more than ten or twelve miles in Wedth [Width] and fifty or sixty Miles in Length, great distress an [and] inconvenience must result to such as may settle in that part of the state, and [document damaged] addition to this the population of those Counties as they are now Situate even if the territory was felled by Inhabitants will not be Sufficient to force a Respectable commerce to the Mouth of the Alatamaha which is among the first and most desireable [desirable] Objects of the Western frontier Settlers
Thirdly


Page: [2]
This law was passed in too hasty and precipitate a manner [document damaged] The representatives being the servants of the people ought to have Obtaind [Obtained] the Cool Sober and deliberate sense of all the Citizens of of the State on a subject to momentory [momentary] and important to all who might have been had by Passing a law and restraining its opperation untill [operation until] a subsequent Legislature had Intervened:-
Fourthly the law in its opperation [operation] will be cruel and unjust and oppressive upon the poorer Class of Citizens any one of those who may draw two prizes entitle him to Land of the first quality will have to pay the enormous sum of four and in some Cases Eight Dollars and upwards this amounts to an absolute denial of Right, for we are Confident there is not more than Fifty Citizens who can raise the sum so that the acts of the Goverment [Government], which ought to be framed for the purpose of protecting benifiting [benefitting] and encourageing [encouraging] the industrious farmer, will be more dreadful and distressing than the haughty Command of a tyrant
Fifthly to suppose that a poor man with a family of young children, Could settle down on a tract of land, Clear and Cultivate the same and be able by the produce of his land to make his first payment three year, is to suppose what we know from experience cannot possible [possibly] happen for a man of the above description let him be ever so Industrious [document damaged] subsist his fa [document damaged] ly for the first three years then we would ask where has he the power to pay the first installment? The answer is plain he hath no means of doing so and the land must of Course revert for the above reasons which appears to us forcible ones we pray that your excellency would exercise all the powers Vested in you to delay a Complete execution of the Law untill [until] another Legislature can intervene and more especially not to Suffer the drawing of the lottery to Commence until after that period- and your memorialists will every pray 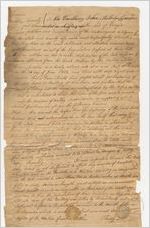