To his Excellency Samuel Elbert Esqr [Esquire] Governor General and Commander in
Chief in and over the State of Georgia
And the Honorable The Executive Council~
The Petition of the Subscribers hereafter written Humbly Sheweth that your Petitioners are Informed that the two Surveys of Land made in the Fork of Rockey Comfort and Ogeeche by Sir James Right is to be Immediately Sold. for cash and your Petitioners has ever Been of oppion [opinion] that the land was vacant until this time. and our Opinion was to the poor Families that is now Living on it that it was [deleted text: vacant ] [added text (appears to be different ink): Relapsed ] . There being Several Poor but Honest Families Settled on the Lower Survey who ventured their Lives in Being the first Settler and Stood as a wall against the Insults that might be Expected from the Savages, Besides this they have made very Considerable Improvements on their places, And your Petitioners Thinks that it would be very Cruel to Brake [Break] up those poor Families with their Helpless Children Being Good Citizens. for the small advantage that may arise from the Sale of the Land as the major Part of it is Barran [Barren] Sand hills. Especially the Lower Tract and all the little spots that is of any value is Settled by those poor and unhappy People, and your Petitioners has so Tender a feeling for those our poor neighbours [neighbors] that your Petitioners Sincerely Prays your Honorable Board will Consider their Grievances and Postpond [Postponed] the Sale of the Lands until the meeting of the next Assembly and if the Land must be sold your Petitioners wish that the Poor Citizens of sd. [said] Land might be allowed the Same Indulgence that has Formerly been Given to Purchasers of Confiscated Property. 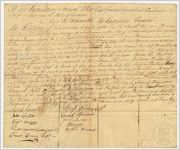