Collection:
Southeastern Native American Documents, 1730-1842
Title:
Letter, 1818 Apr. 2 [to] William Rabun, [Governor of Georgia], Milledgeville, Georgia / Hugh Montgomery
Creator:
Montgomery, Hugh, fl. 1831
Date of Original:
1818-04-02
Subject:
Cherokee Indians--Government relations
Boundaries
United States. Office of Indian Affairs
Location:
United States, Georgia, 32.75042, -83.50018
Medium:
military records
requisitions
Type:
Text
Format:
text/html
image/jpeg
Description:
Hugh Montgomery (appointed U.S. agent to the Cherokees in 1825) consults Georgia Governor William Rabun (1817-1819) before commencing with the running of a boundary line between Georgia and the Cherokee Nation. Montgomery expresses fear that the 35th degree of north latitude will run south of Nickajack, contrary to what the maps show, and he asks the governor what he should do if that is the case. Montgomery explains to Rabun that he needs more men to run the northern boundary line, and he asks for coin money from the treasury since he will be depending entirely on supplies bought from Indians who are unfamiliar with paper currency.
Digital image and encoded transcription of an original manuscript, scanned, transcribed and encoded by the Digital Library of Georgia in 2001, as part of GALILEO, funded in part by a grant from the Institute of Museum and Library Services.
Local Identifier:
tcc772
Metadata URL:
https://dlg.usg.edu/record/dlg_zlna_tcc772
Digital Object URL:
https://dlg.usg.edu/record/dlg_zlna_tcc772#item
Language:
eng
Bibliographic Citation (Cite As):
Cite as: [title of item], Telamon Cuyler, Hargrett Rare Book and Manuscript Library, The University of Georgia Libraries, presented in the Digital Library of Georgia
Extent:
4 pages/leaves
Original Collection:
Manuscript held by the Hargrett Rare Book and Manuscript Library, The University of Georgia Libraries, Telamon Cuyler, box 06, folder 08, document 01.
Holding Institution:
Hargrett Library
Rights:

2nd April 1818
Sir
as the time is fast aprouching [approaching] when we will have to set out to Run the Northern boundary Line, perhaps it will not be amiss to adress [address] you a few lines on the subject of arangements [arrangements] in order that when aur [our] instructions are Received they may be [illegible text] as to some points, on [added text: which ] your Excellency ought to be consulted, & on [deleted text: which a ] which we may not have an oppertunity [opportunity] to consult you after we Recieve [Receive] our General Instructions, & first I have for a Long time feared that the state would find out a secret whenever that Line was Run (& a secret [added text: two [to] ] which would not Relish verry [very] well with hir [her] ), in Runing [Running] the above Mentioned Line, I fear (& that fear is founded on the opinion of several persons pretending to know) that the 35th Deg [Degree] of North Latitude will be found South of Nickajack Contrary to all our Maps, & the Generaly [Generally] Recd [Received] opinion founded there on


Page: [2]
[illegible text] should that prove to be the case where are we to begin?
[deleted text: [illegible text] ] Secondly, Mr Stacks in a letter to me mentions that you seem to be of opinion that four will be sufficient for Chain & ax men, so it appeared to me at first thought, but on Longer Reflection it appears to me that the Interest of the State would be promoted by allowing us to employ five say two Chain & two ax men & one to act as Circumstances might Require, in Runing [Running] the Distance of that Line through an entire Wilderness & a Great part of it the worst of mauntains [mountains], it would be Rare & not to be expected that we Should have neither sickness nor accident among our little company, in either Case the whole might be Detained by the Defalcation of one an other Circumstance which it is more then [than] probable may Occur, in Mountains like those we have to traverse whose


Page: [3]
Bawels [Bowels] are full of Oars [Ores], we may & no Doubt will find many places where our needle will not traverse, here we will have to go bac [added text: k ] to where it will, & Run or steer with Flag staffs, this will Require three Men independant [independent] of Chain & ax men, indeed Sir I Can picture to myself a thousand instances where at least one spare hand would be of importance to the service, - if on second Reflection your Excellency should think with me will you be so good as to write me on that subject in time as Mr Stacks writes me he will have to trust to me intiry [entirely] to imploy [employ] them
As the arangement [arrangement] now stands I mean that we commence at Nickajack, it will be necessary that we have some of the pracious Mettals [precious Metals] along with us, (& so I have written Mr Stacks) all our Supplys [Supplies] will have to be procured from Indians who know nothing of Bank Bills, & indeed those are becoming scare [scarce] articles in the up Country, if there is any of the Shining Stuff about the Treasury It is all important that he [unclear text: should ] have some [document folded: of ] it 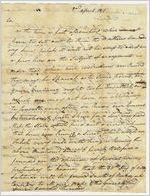