April 4th 1794
Sir
Inclosed I have the honor to transmit the arrangements made in Camden County, on my Tour in the first Brigade, first Division where agreable [agreeable] to your Verbal information I indulged full expectation to see you: but not been honored with your presence in those parts of the State I adopted such regulation as I concieved [conceived] in my judgement best calculated to render harmony and safety to the People, and which I now have the honor to report; to your consideration and Patronage.
I have called on the Agent of supplies in Savannah respecting provision; who assured me the want of supplies at present time (the
29th of March 1794) did not exist from any cause arising in his Office, and that Captn [Captain] Johnston had been furnished a supply for Camden Garisons [Garrisons] which had gone forward to said County.
Nothing but the conviction in my mind that you were on a Tour on the Frontier, and that you would shortly repair to those parts of the Country accompanied with the uncertainty where to direct an express to you withheld an earlier Report.


Page: [2]
I have given Charge to the Commandant of Glynn County to give all possible attention to the Garison [Garrison] at St Savilla, and from the readiness of that Gentlemen am Confident that the abuses of the Contractor Department will be no more.
A Board of Officers held at Brunswig the
10th February 1794 recommends a Station at Carnes old place to be garisoned [garrisoned] by part of the Dragoons stationed at St Sevilla and the Commandant of the County informed me that a Genl [General] Order directs a Blockhouse to be erected at said place in consequence whereof he (Lt Colo [Colonel] Burnett) has ordered the same and called on the contractor for supplies to be furnished at the Head of Turtle River Glynn County for the same.

I have the honor to be with due esteem Your Obdt Adjt Genl [Obedient Adjutant General]
[Signed] Augustus C: Geo: [George] Elholm
His Excellency George Mathews Governor and Commander in Chief


St Mary's
24th February 1794
The honble [honorable] George Augustus Elholm Adjutant Genl [General] of the State of Georgia having requested of the justices of the county of Camden and officer commanding the Militia of the same to point out to him the Eldest officer in the County, he being unacquainted with any of them, and the Field Officers being both absent, and some persons saying that Captn [Captain] Hebbard of the second District and others that a person named Hugh [deleted text: Daw ] Brown that was commissioned for the fourth District but which has never resided in the same since his being commissioned was the oldest, and as he is unable to determine or say which is the most legal, we the underwritten do give it as our opinion to the Adjutant Genl [General] that agreable [agreeable] to the Militia Law of the State Captn [Captain] Hebbart is the only Legal officer at present and that the command of the Militia of this County aught [ought] to devolve on him in the absence of the Field Officers


Garison [Garrison] at Cole Rain
February The 26xt 1794.
As the absence of the Field Officers of Camden County renders it necessary in the present State of Alarm that one of the Captns [Captains] Sho [added text: u ] ld take a Temporary command of the said County the Adjutant Genl [General] has summoned a board of Officers to take that important subject into consideration that measures thereby may be adopted whithout [without] delay for the preservation of the Inhabitants untill [until] by a due information of the present situation may be given to his Excellency who will thereby be enabled to make further regulations


Page: [6]
of the Field Officers be given to Captn [Captain] Elihu Hebbard of the 2d District within said county until otherways [otherwise] regulated by order of his Excellency the Governor Commander in Chief

The above Board having formed itself into a council of safety in consequence of the present threatning [threatening] state of affairs to the Frontiers of the county Richd [Richard] Gascoigne Esqr having joined the Board said Board at the requisition of the Adjutant Genl [General] took into consideration the recommending of proper spies to reconnoiter the frontier of Camden County agreable [agreeable] to the regulations of the President of the United States, and the number of Persons necessary to perform said services, and also [unclear text: whether ] the present crisis of affairs do immediately require another station to be garisoned [garrisoned] on the River St Mary's. -- The Board are [deleted text: of ] unanimousely [unanimously] of opinion that it will be necessary ten proper persons be appointed as spies for said County to reconnoiter the Frontiers arranged in the following manner; (to wit) The Frontier from the Burnt Fort to little Satilla (the Distance Being twenty Miles) to be reconnoitered by four spies; The Frontiers from the Burnt Fort to Cole rain (the Distance


Page: [7]
Twelve Miles) to be reconnoitered by two spies The Frontier from the Colerain down the Meanders of St Mary's River to Temple (the Distance Eleven Miles) to be reconnoitered by two spies The Frontier from Temple down St Mary's to the mouth of Catfish (the Distance ten Miles) to be reconnoitred [reconnoitered] by two spies. -- Also recommend that a Militia Guard of five men be stationed at Temple, and another Guard of a sergeant and ten men of the Militia be stationed at Clark's Bluff on St Mary's, and a Blockhouse Built on said Bluff sufficient for said Guard, and also recommend that a Guard of Cavalry may be detached by Captn [Captain] Randolph to Mr Wrights place to guard the noted crossing place known by the name of Millses Ferry on saint Mary's River

And it is further recommended by the Adjt Genl [Adjutant General] Captn [Captain] Hebbard and Richard Gascoign Esqr. who lately reconnoitered the River St mary's from the Town up to the Frontier Station of Colrain that a Gunn-Boat be Built capable of convaying [conveying] provisions in safety to said Station there being no other convenient means or way


Page: [8]
of conveyance but by watter [water] which now has become very dangerous by means of the Hostile disposition of the Indians who has lately taken possession of the evacuated Spanish Teritorry [Territory] situate on the sd [said] side of St Mary's. --
The above Board taken the same into consideration unanimously [deleted text: agree ] acknowledge the absolute necessity of speedily carrying into effect the above recommendation and that his Excellency the Governor may be informed thereof; as the safety of the country depends upon the respective Garisons [Garrisons] on the Frontiers and the Garisons [Garrisons] on the safe conveyance of provisions up the said River --
(signed)
[Signed] Hugh Brown Captn [Captain]
[Signed] John F: Randolph Captn [Captain]
[Signed] William Dawson Captn [Captain]
[Signed] Nath: [Nathan] Atkinson Lieut [Lieutenant]
[Signed] R: McGillis Lieut [Lieutenant]
[Signed] John Hunter Lieut [Lieutenant]
[Signed] John Hardy Ensign
[Signed] Richd [Richard] Gascoigne [unclear text: J:P: ]
[Signed] Elihu Hebbard Presiden [President]
Copied from the Original --
[Signed] Augustus C: Geo: [George] Elholm Adjt Genl [Adjutant General]
His Excellency George Mathews Governor and Commander in Chief

February the 28th 1794
Sir
Being by an unanimous consent appointed Captn [Captain] Commandant pro tempore by a Board of Officers of this county composed of the Captn [Captain] and subalterns met to Council on the present alarming state of affairs in Camden County, the honor of said County, and preservation of Individuals; in the absence of your Field Officers, has become your peculiar case, your task therefore is to lend a watchfull [watchful] Eye to the conduct of the respect company Officers, and promote all attention necessary in the present crisis respecting Provision supplies; you will also examine the State of the Regiment, and its Garisons [Garrisons] respecting ammunition, and when necessary for the common defence [defense] draw the necessary quantities from the Public Stores, and carefully distribute the same occasionally and keep records of receipts, and deliveries that the affair of the Regiment may be duly administered agreable [agreeable] to General Orders; and in cases of difficulties when a proceeding of that nature will not interfere with General Orders, I recommend strongly to you to summon council of officers civil and Military to consult requisite


Page: [10]
Measures for the promotion of the Public Weal and good order, and should be happy to experience the proceeding of the Board of the 26st instant were sanctioned that the respectibility [respectability] of a Board of Magistrates might enforce in a stronger Degree the requisite recommendation to his Excellency, or if thought unavoitably [unavoidably] necessary to proceed in a speedier manner to avoid a pending Danger
You will also direct the Vacancies of Comg [Commanding] Officers to be filled agreeable to the Militia Law of the State, and to forward the appointments to his Excellency the Governor if found necessary to the promotion of good order, and occasionally pay you attention to the performence [performance] of the duty of the respective spies on the Frontier of the county. --
Elihu Hebbard Captn Comdt [Captain Commandant] pro temporeCamden County
[Signed] Augustus C: Geo: [George] Elholm Adjt Genl [Adjutant General]
Copied from the records.
[Signed] Augustus C. Geo. [George] Elholm Adjt Genl [Adjutant General]
His Excellency George Mathews Governor and Commander in Chief


Colerain Station
February the 28th 1794
Sir
I am sorrow [sorry] to remind you of the reduced situation of the Horses in Captn [Captain] Randolph's Troop, for want of Forage; on one hand and on the other to be sensible of the great necessity for expert rangers on the Frontier to preserve our Citizens from the threatning [threatening] outrages of savages on every side, and hope is long to learn that your zeal will remove every want of supply to our garisons [garrisons] depending on your exertions; I have long wished to see you; and expected that pleasure the other day at St Mary's and should return that [added text: way ] could I command time. Thus situate I beg leave to send my due respect to you I shall see the Agent of supplies soon and shall endeavour [endeavor] to advance every means that may enable you to furnish necessaries to the Troop as the preservation of the citizens can not be acquired otherways [otherwise] .


Page: [12]
Report from the Office of Adjt Genl [Adjutant General] respecting the arrangement in Camden County
1794

State of Georgia
A Recapitulation


Copy of the certificate of the Muster Roll from whence the above recapitulation is extracted
We do certify [deleted text: that ] the above Muster Roll to be a true statement as mustered by the requisition of the Adjutant Genl [General] but in justice to the public wellfare [welfare] must acknowledge the horses for want of forage at this time are unfit to perform the necessary Duty

State of Georgia
A Recapitulation


Copy of the certificate of the Muster Roll from whence the above recapitulation is extracted
We certify the above Muster Roll to be a true Statement as Mustered by the requisition of the Adjutant Genl [General] But in Justice to the Public good we must acknowledge that Eleven of the horses for want of Forage at this time are unfit to perform the necessary Duty.
(Signed)
[Signed] John Burnett Lt Colo Comdt G:C: [Lieutenant Colonel Commandant Glynn County]

His Excellency George Mathews Governor and Commander in Chief Augusta 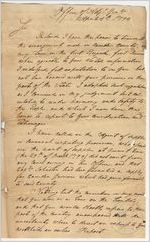