Collection:
Southeastern Native American Documents, 1730-1842
Title:
Petition of Augustus Christian George Elholm, 1792 Dec. 6, Augusta, [Georgia]
Date of Original:
1792-12-06
Subject:
Creek Indians--Warfare
Cherokee Indians--Warfare
Alliances
Georgia. Militia--Mobilization
Location:
United States, Georgia, 32.75042, -83.50018
Medium:
petitions
Type:
Text
Format:
text/html
image/jpeg
Description:
This is the petition of Augustus Christian George Elholm to the Georgia state assembly, dated December 6, 1792. The petition discusses the desire of settlers along rivers within the Cherokee Nation to organize a body of volunteers to protect themselves and their neighbors from alleged threats of attack by the Creek Indians. This petition also requests that such volunteers might be paid for their service with land lying near the Tennessee River. The document also alleges a conspiracy between the Creek and Cherokee Indians to attack the citizens of Georgia.
Digital image and encoded transcription of an original manuscript, scanned, transcribed and encoded by the Digital Library of Georgia in 2001, as part of GALILEO, funded in part by a grant from the Institute of Museum and Library Services.
Local Identifier:
tcc753
Metadata URL:
https://dlg.usg.edu/record/dlg_zlna_tcc753
Digital Object URL:
https://dlg.usg.edu/record/dlg_zlna_tcc753#item
Language:
eng
Bibliographic Citation (Cite As):
Cite as: [title of item], Telamon Cuyler, Hargrett Rare Book and Manuscript Library, The University of Georgia Libraries, presented in the Digital Library of Georgia
Extent:
4 pages/leaves
Original Collection:
Manuscript held by the Hargrett Rare Book and Manuscript Library, The University of Georgia Libraries, Telamon Cuyler, box 05, folder 03, document 02.
Holding Institution:
Hargrett Library
Rights:


Augusta
Decbr [December] the 6st '92
Georgia.
To The honble [honorable]
The Speaker and Members of the Representitives [Representatives]
The Petition of Augustus Christian George Elholm respectfully Sheweth.

That the People of Nala Chucky Watagau, Holston, and Fransh-Broad, anxious to Assist their Suffering Brethern [Brethren], (by the Invasion of the Creek Indiens [Indians] ) in
1787 Sent your Petitioner as Agent. (to negotiate with ful [full] Power;) to offer their Service was entered into between the Legislature and your Petitioner that the said People who would act as Volunteers in Consort [Concert] with Georgia, against said Indiens [Indians], in such a Manner as the Commanding Officer of said Volunteers Should think best for the safety of Georgia, and themselves, and that they should be recompenced [recompensed] with Land Laying in the big Bent of the Tenasee; in the same


Page: [2]
Proportion, as the then Raised Soldiary [Soldiery] in Georgia by Virtue of an Act of surpressing [supressing] the Violence of the Creek Indiens, with an Addition of Fifty pr. Ct. [per Cent] for Sending themselves.
That the Creeks in a Secret Alliance with the Cherokees, in order to discover the defencive [defensive] place of opperation [operation], Sometime after this: -- fell jointly with the Latter, on those Friendly Citizens, who in Consequence thereof; for their Own safety and that of Georgia; destroyed Several Chiefs, and many Towns of those Hostile Allies: Besides a considerable number of Common Wariours [Warriors], and that they conteenued [continued] a defensive opperation [operation] until they received Orders from the Genl. [General] Government to desist: -- That they faught [fought] the Creeks at sundry Battles on the Tenasee, and Fransh-Broad, and that a Body of 300 of the said Enemies burned a Station on the Fransh Broad.
Your Petitioner hope that Georgia will reward those Friends, and himself in such a Manner as the Wisdom of this Houses, when searched the Records shall deem just.

Prosperity to the State!
[Signed] Augustus Christian Geo: [George] Elholm
P:S:
The endeavour [endeavor] of Your Petioner [Petitioner] not to detain the attention of this Assembly from more importent [important] Matter has occasioned the Petition, too brief to Convey all necessary information which


Page: [3]
He shall be ready to give whenever he may be indulged the honor to wait on a Committee Yet he can not omit Mentioning, that it was a Secret commission from this Government in
86, that obtained him the acquintance [acquaintance] with those brave Citizens, that the Confidence of those industrious Patriots Confered [Conferred] on him as a Stranger among [added text: them ] Claims the more his utmost exertion to acquire them that justice which their Conduct entitles them to, and that the greatest satisfaction the magnanimity of this house can afford him, is to grant on investigation of the Stated Claim.
Prosperity to the State. 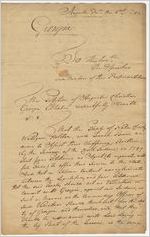