Sand Hills
June 15. 1826
My dear sir
Your letter of the
24th of May returned from Washington, reached me last night.
I receive with great satisfaction your assurance that my course on a late occasion has met with approbation of those, whose approbation is above [illegible text]
Probably you [added text: now ] have full information of what has occurred in Washington much more full information than I can give you. I had no knowledge of the arrangments [arrangements] of the new Contract either before or after [unclear text: Col Benton ] took an active part in it, untill [until] the additional article was either agreed on or just about to be reduced to [illegible text] for the first time learned from [illegible text] Cobb & Meriwether that such an addition to the Treaty was Contemplated [added text: in the Dept. ] I Expressed to them my private opinion that it was idle to affect a desire to [unclear text: mark ] the wishes of the State as it must be obvious an express surrender of all the creek lands in Georgia could be as easily procured as an extension of lines which would [added text: nearly ] accomplish that object. The new contract would certainly have been rejected by the Senate but for the additional article. What course the President would in that event have taken can not be known. Our friends apprehended that he would [illegible text] into the House the Great mass of matter gathered up by andrews & Gaines & that [document damaged] [illegible text] be misled by it to some attempt injurious to the interest, & contrary to the rights of the State. For myself I was quite [unclear text: prepared ] to encounter this danger, altho' [although] aware of the extent of it & of the great prejudice [unclear text: which ] had been excited against us in & out of Congress. What has been done, will I hope turn out for the best The recent disclosures cannot fail to have a salutory [salutary] effect on the publick [public] mind & will prepare the people of the U. States to receive " [Latin: [unclear text: cum grano solis ] ] " future statements to the injury of the character of the State or of its functionaries. 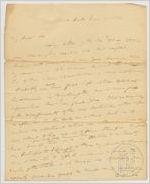