March 5. 1825. Washington
My dear Sir
The treaty arrived here so late that it could not be acted on in time to enable the President to communicate it when ratified to the House of Reps. [Representatives] early enough to procure an appropriation to carry it into effect. All that could be consistently done was to ask a contingent appropriation, which was made by Congress. The treaty was ratified by the Senate, I understand on the
3d. of March after an ineffectual opposition. The appropriation is for 250,000 dols. [dollars] to cover the first payment to the Creeks & to provide a fund for purchasing lands for them over the Mississipi. As soon as the bustle of inauguration is over I shall see the new President & press upon him the propriety of [unclear text: directing ] the earliest arrangements for the removal of the Creeks [unclear text: to ] their promised land.
Mr Hugh Montgomery has been appointed Cherokee Agent. The appointment & the acquisition of all the Creek land give flattering hopes that the hour for the final accomplishment of our wishes is at hand. I trust another year will not be suffered to


Page: [2]
pass before the Cherokees will be induced "to follow the pattern of the Creeks." So a speedy & friendly termination of our unpleasant controversy with the general Govt should [illegible text] with the same ardent wishes which have animated my [unclear text: colleagues ] in the Georgia delegation & which has been felt in [unclear text: Common ] with you [illegible text] Citizens both of [unclear text: & out of ] the Legislature of the State. My satisfaction will be perfect at our [unclear text: potential ] success, if it is to be followed by such a disposition of the acquired territory as will enrich our treasury & secure a speedy settlement of the recent purchase. Our lottery system has been found admirably calculated for the last purpose could there not be such a modification of it [unclear text: has ordered ], as would accomplish the former. I suppose the safest mode of doing this will be to arrange the [illegible text] in such a manner as to nullify the number of the fractions.
The Senate are in session as the nominations for the new cabinet. Mr Clay as Sec [Secretary] of State. Your old classmate Rush, Sec [Secretary] of the Treasury. Govr. [Governor] Barbour Secy [Secretary] at War. Mr [illegible text] has been offered a mission to England but he declined [deleted text: [illegible text] ] it.

With the hope of seeing you before a great while I am my dear sir sincerely your friend
[Signed] John Forsyth His Ey. [Excellency] G. [George] M Troup. 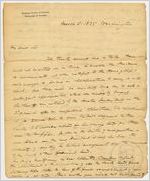