Collection:
Southeastern Native American Documents, 1730-1842
Title:
Letter, 1836 Jan. 21, Tallahassee, [Florida to] W[illia]m Schley, Governor of Georgia, Milledgeville, [Georgia] / John H. Eaton, Gov[erno]r of Florida
Creator:
Florida. Governor (1834-1835 : Eaton)
Date of Original:
1836-01-21
Subject:
Military assistance
Georgia--Militia
Seminole War, 2nd, 1835-1842
Military service, Voluntary
Location:
United States, Alabama, 32.75041, -86.75026
Medium:
official reports
military records
Type:
Text
Format:
text/html
image/jpeg
Description:
This document is a letter from John H. Eaton, former U. S. Secretary of War (1829-1831) and Governor of the Florida territory (1834-1836), to William Schley, Governor of Georgia (1835-1837), dated January 21, 1836. Eaton informs Schley of the recent events of the Second Seminole War (1835-1842) and urges him to issue a call for further volunteers to support the troops already afield in the Florida territory. He states that he has information that Creek Indians from Alabama are reinforcing the Seminole warriors. Eaton asserts that the war cannot be won with small detachments, rather the Indians must be "overwhelmed" with large numbers of troops and forts. He goes on to indicate the urgency of the present situation, remarking on the coming "sickly" season, as well as seasonal rains, that will impede troop movement and subsistence.
Digital image and encoded transcription of an original manuscript, scanned, transcribed and encoded by the Digital Library of Georgia in 2001, as part of GALILEO, funded in part by a grant from the Institute of Museum and Library Services.
Local Identifier:
tcc729
Metadata URL:
https://dlg.usg.edu/record/dlg_zlna_tcc729
Digital Object URL:
https://dlg.usg.edu/record/dlg_zlna_tcc729#item
Language:
eng
Bibliographic Citation (Cite As):
Cite as: [title of item], Telamon Cuyler, Hargrett Rare Book and Manuscript Library, The University of Georgia Libraries, presented in the Digital Library of Georgia
Extent:
4 pages/leaves
Original Collection:
Manuscript held by the Hargrett Rare Book and Manuscript Library, The University of Georgia Libraries, Telamon Cuyler, box 03, folder 18, document 01.
Holding Institution:
Hargrett Library
Rights:

21. Jany. [January] 1836~
Dr [Dear] Sir
To night [Tonight] yr. [your] letter was recd [received], saying that volunteers had been invited to the field. From Washington no intelligence is yet recd [received], & I greatly regret it.
Light [illegible text] warefare [warfare] will not [unclear text: answer ], no good can result. If this war is to be ended cheaply & quickly a large & efficient force must be called out. That cannot be done here The population is too, [unclear text: scarce ] & sparse to raise them. I have already issued orders for 600, which is 20 prCt [per Cent] of the whole population and yet the frontier of Florida is not more at hazard, than Gerga [Georgia], Insurrection - invasion & rebellion then, may as well apply to your jurisdiction as to mine. An ideal line, can not be the terminus of Indians revenge. By the best accts [accounts] the force of Indians & negroes embodied can not be less than 2.000, to say nothing of many Creeks from Alabama, that we have reason to believe have gone to the Semenoles. What then signifies the sending of small detachents [detachments] : our force should be so, overwhelming, as to be able to create forts & hold on the Country as we advance -- No other mode of action will give us peace
If Georgia could throw a 1000 men into the field to march to camp King, where now are about 200 regulars - and the troops here raised proceed to Tampa, say about the same force, there by concerted action they could


Page: [2]
move & in two or three days form a [illegible text], & overwhelm the embodied forces of the Indians to the South of Tampa after this to move South in a body, the whole Indian force could speedily be subdued, We have plenty of transports to carry troops & provisions to Tampa, whence the army could be abundantly supplied. But whatever can be done, ought soon to be done, for presently the sickly season will commence, & the wet season too, when militia operations will be attended with great difficulty
The force from this Territory will go as Infantry on foot, the dreary Country in which they have to act, & pass thro [through] makes it impossible to support horses. As regards this inconvenience & difficulty from your State you best can judge. Tampa is the first place, where they could find forage, which is 100 miles from Camp King If the force could be half mounted, then, the foot & mounted men, alternately exchanging, expedition would be the consequences and the horses, might in other respects be found serviceable They might carry enough to [unclear text: boat ] to Camp King; or from the frontiers of Geoga [Georgia], each Horseman might pack enough with the [unclear text: aid ] of [unclear text: grass ] on the way, to subsist his horse to Tampa, where supplies would be found- But the entire force had better not be mounted.
In the course of next week our force say 600 will I hope be ready to proceed to Tampa; but that will be useless if Georgia, in force to the amount stated, can not proceed to Camp


Page: [3]
King to make the simultaneous movement I have suggested, & which alone can prove effectual. Hence must I wait to hear from you. Celerity is all important and I beg to urge it upon you- There is too much good feeling in your state not to act promptly. Give but the signal, & the people will be aroused; nor will they I feel persuaded stop at the line, to enquire if they shall advance farther. Where are some of your old efficient captains? give them the word & raise men, and go, where they choose- that will be enough- my life upon it the general governm't [government] & your own people will not act, then will we go and alone, & unaided seek to defend both ourselves & neighbors, who equally with ourselves are in danger- much danger

[ Note: A postmark appears on the left of the page.; TALLAHASSEE 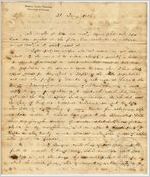