Tallahassee
8th Jany [January] 1836
Sir
I enclose you herewith my report of the result of the expedition to the Indian Country from which I have just returned. The exposed situation of the frontier, the hostile attitude and war like caracter [warlike character] of the Indians requires that the most prompt and efficient measures should be adapted without delay for prosecuting the war in the enemys, The precise strength of the Enemy has not been ascertained, It is variously estimated by men of intelligence to be from 1200 to 2000. It is known they have applied to the Creek Indians for assistance and no doubt is entertained that a considerable number [word omitted: of ] warriours [warriors] from that nation is already in the Country. Though I have with the forces lately under my command driven back the enemy within his own boundry [boundary] along the whole line of the Frontier from the Suwannee to the St. Johns. Yet on the East of the latter River at the last inteligance [intelligence], the work of desolation was still progressing and all the plantations South of Tampa were distroyed [destroyed] the Indians are resolved not to abandon the Country which contains the lives of their fathers, They have raised the Tomahawk in despair, they are waging a war of extermination and the safety of our fellow Citizens requires that not a moment should be lost in carrying the war into their own Country as yet no peperation [preparation] has been made. Genl [General] Clinch when I left him on the 3rd Inst. [Instant] could not have carryed [carried] in to the field a regular force of more than one hundred and fifty men from additional Companies were said to be at Tampa Bay. or on their march from that place to Fort King. But no certain intelligence had been received and some fears are entertained that they may have been cut off by the enemy
The country in which we must


Page: [2]
meet the enemy is peculiarly favourable [favorable] to the Indian mode of warfare it is interspersed with swamps and Hammocks, where alone they [deleted text: can ] are to be found, and in which they have a decided advantage. To bring this War to a spedy [speedy] and successful issue an army of 2500 or 3000 men should be immediately ordered in to the field. I have written to the President of the United States asking for 1000 Regular Troops. I would now recommend that 1500 footmen well armed and equiped [equipped], be required from the state of Georgia, for the term of six months and that all the disposable force of the Territory be called into service for the same length of time, with such a force well employed the war may be brought to a conclusion in a Short time, but it is in vain to think of subduing a fierce and desperate enemy, selecting his own ground for battle with a force less efficient The detachment of One hundred and fifty Volenteers [Volunteers] which I met on its way to the frontier, I placed [deleted text: Coln [Colonel] Parish ] under the command of Coln [Colonel] Parish whom I directed to report himself to Genl. [General] Clinch. They will serve as guard to the settlement until an army can be carryed [carried] in to the field 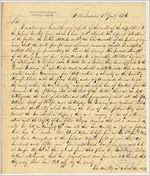