Collection:
Southeastern Native American Documents, 1730-1842
Title:
[Letter] 1809 Feb. 4, Washington, [D.C.] to Jared Irwin, Governor [of Georgia], Milledgeville, Georgia / W[illia]m H. Crawford
Creator:
Crawford, William Harris, 1772-1834
Date of Original:
1809-02-04
Subject:
Cherokee Indians--Land tenure
Cherokee Indians--Treaties
United States--Foreign relations--1783-1815
Cherokee Indians--Relocation
Location:
United States, Georgia, 32.75042, -83.50018
Medium:
letters (correspondence)
Type:
Text
Format:
text/html
image/jpeg
Description:
William H. Crawford, U.S. Senator from Georgia, writes to Georgia Governor Jared Irwin (1806-1809) on February 4, 1809 to update him on recent legislative proceedings. Among other topics (mostly foreign affairs), Crawford informs the governor that he met with the President to discuss Georgia's acquisition of Wafford's Settlement, a tract of land ceded to the U.S. by some Cherokee leaders in 1804, and he further reports that many Cherokees are inclined to remove to territory west of the Mississippi River. Those Cherokees so disposed will go west in the summer to choose settlements, and they will cede their land in the east in exchange for the new territory. Crawford mentions an enclosure, the response of the President to an address made by the legislature of Georgia, that is no longer attached.
Digital image and encoded transcription of an original manuscript, scanned, transcribed and encoded by the Digital Library of Georgia in 2001, as part of GALILEO, funded in part by a grant from the Institute of Museum and Library Services.
Local Identifier:
tcc722
Metadata URL:
https://dlg.usg.edu/record/dlg_zlna_tcc722
Digital Object URL:
https://dlg.usg.edu/record/dlg_zlna_tcc722#item
Language:
eng
Bibliographic Citation (Cite As):
Cite as: [title of item], Telamon Cuyler, Hargrett Rare Book and Manuscript Library, The University of Georgia Libraries, presented in the Digital Library of Georgia
Extent:
4 pages/leaves
Original Collection:
Manuscript held by the Hargrett Rare Book and Manuscript Library, The University of Georgia Libraries, Telamon Cuyler, box 03, folder 05, document 01.
Holding Institution:
Hargrett Library
Rights:


Washington
4th Feby. [February] 1809
His Excellency Jared Irwin
Sir.
Inclosed is the reply of the President of the United States to the address of the legislature of Georgia, which we had the honor to present to him some time since
On Friday last the house of Representatives by a vote of 73 to 40 adopted a resolution for the repeal of the embargo on the
fourth day of March next. A motion was then made to strike out that part of the Original resolution which provides for issuing letters of mark and reprisal against vessels of France and England- this motion has been the subject of discussion up to the present moment, and no decision has yet been had upon it. It is more than probable that it will prevail, & if it does I shall not be surprised, if the whole resolution falls to the ground. The dis contents [discontents] of the


Page: [2]
East, on one hand and a conviction of the propriety of waiting the result of the campaign in Spain, & its effects upon the British Cabinet, on the other, act with such equal force upon the majority of Congress, as in a great degree to paralise [paralyze] its exertions. From recent accounts from Europe there is but little doubt, that B [document damaged] parte has before this time over-run the whole peninsula, and captured the British armies unless they have had the good fortune to escape in their ships. It appears that the Convention of Cintra has excited general indignation in England, and if the defeat of her armies, & the loss of Spain & Portugal, should happen before that indignation should subside, the ministry will have every thing to apprehend & must be firmly secured in their [unclear text: seats ] indeed, if they shall be able to withstand the shock. I observe that Parliament was to meet on the 16th ult [ultimo] ; about which time the extent of thier [their] misfortunes on the Continent will be fully as certained [ascertained], and the mind of the nation will be ripe for an exertion against the ministry. Cotton was very high &


Page: [3]
rather advancing the first of last month. The capital embarked in the Spanish trade by British Merchants was immense, a great part of which will be lost in the event of their being driven out of that country.
A few days past we waited on the President with the resolution of the Legislature of Georgia [document damaged] Wafford's settlement, & obtained from him a promise that all proceedings by the military against the people south of that settlement should be suspended. Wafford's settlement will be secured either by submitting the agreement or treaty to the Senate or by a declaration on the part of the President that as it was executed with money appropriated for the Indian department generally & needed no legislative aid, that therefore it was unnecessary to submit it to that body. We also learned that 10 towns of the lower Cherokees, & most of 12 towns of the upper Cherokees are disposed to remove to Louisiana & settle on lands of the U.S. They are to go this summer, & if they are pleased, are to choose their settlements & in lieu of this land, they are to cede to the U.S such proportion of their lands here, as those who remove [unclear text: bear to ] those who remain This will enable the govt. to extend our boundary to the Chatahoochee river. 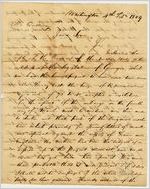