Waynesville, Wayne Cty. [County]
2d. June 1836.
Sir,
I have the honour [honor] to inform your Excellency, that the "Glynn Hussars" at a meeting held yesterday, have unanimously volunteered their services to proceed at any time, to any point, that you may designate: and for such a term of service as you may deem desirable.
I regret that my absence from the state, from early in
December until late in
May, has prevented a more efficient organization of the troop: which is in the same state that it was when Lieutenant King rendered in his report. An effort is now making to increase the number of its members, of the result of which I will duly inform your Excellency.
I would have proposed to the troop, to march at once to the Creek Nation, but for the belief that the exposed situation of our own immediate frontier, on the St. Mary's river; and the small white and large negro population in the south eastern counties, render it important that the small effective force of this section of the state should be reserved to be in readiness for its protection. Should however the services of the troop be required elsewhere, the call of your Excellency will be promptly responded to-

I have the honour [honor] to be, most respectfully, your obd. sert [obedient servant]
[Signed] J [James] Hamilton Couper Captain Glynn Hussars
His Excellency William Schley. 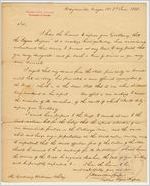