Collection:
Southeastern Native American Documents, 1730-1842
Title:
[Letter], 1832 Oct. 9, Etowah, [Cherokee Nation] to Wilson Lumpkin, Governor [of Georgia], Milledgeville, Georgia / Jno. [i.e., John] Coffee
Creator:
Coffee, John, 1782-1836
Date of Original:
1832-10-09
Subject:
Cherokee Indians--Government relations
Cherokee Indians--Land tenure
Cherokee Indians--Treaties
Location:
United States, Georgia, 32.75042, -83.50018
Medium:
letters (correspondence)
Type:
Text
Format:
text/html
image/jpeg
Description:
This is a letter dated October 9, 1832 from General John Coffee at Etowah to Wilson Lumpkin, Governor of Georgia (1831-1835). Coffee refers to a recent answer given to the secretary of war by Cherokee Chief John Ross regarding Cherokee lands in North Georgia and agrees that it was "high toned and insolent." Coffee maintains that many Cherokee leaders, however, are willing to sign a treaty with the United States, and he says that they have tried to encourage this idea among the rest of the Cherokees in the area. He mentions an upcoming meeting between the Cherokee council and U. S. commissioners and promises to send the governor all of the details of the meeting as he receives them. He goes on to say that he is confident that the land dispute will be settled soon and that they will meet with no real opposition from the Cherokees.
Digital image and encoded transcription of an original manuscript, scanned, transcribed and encoded by the Digital Library of Georgia in 2001, as part of GALILEO, funded in part by a grant from the Institute of Museum and Library Services.
Local Identifier:
tcc718
Metadata URL:
https://dlg.usg.edu/record/dlg_zlna_tcc718
Digital Object URL:
https://dlg.usg.edu/record/dlg_zlna_tcc718#item
Language:
eng
Bibliographic Citation (Cite As):
Cite as: [title of item], Telamon Cuyler, Hargrett Rare Book and Manuscript Library, The University of Georgia Libraries, presented in the Digital Library of Georgia
Extent:
4 pages/leaves
Original Collection:
Manuscript held by the Hargrett Rare Book and Manuscript Library, The University of Georgia Libraries, Telamon Cuyler, box 01, folder 46, document 23.
Holding Institution:
Hargrett Library
Rights:


Head Quarters Etowah
October 9th 1832.
Governor Lumpkin
Sir;
Yours under date
24th Ult. [Ultimo] I have received. The answer given to the secretary of war, to the kind, and liberal protections submitted to the Cherokees is, as you say, high toned & insolent and is viewed by some of the principle [principal] men of the nation, as uncalled for, & untimed [untimely], if not unauthorized. Mr. Ross was, as I understand instructed by the Council, to say to the president that the nation had no land to sell.
From information I have received since my return, I am of the opinion, that there is not one intelligent man in the Charter of Georgia, that is not anxious to treat; and some of the most influential have been riding over the nation, exerting their influence to produce a corresponding disposition on the part of the Indians generally. how far they have succeeded I cannot say, but I hope much from the deliberation of the present Council. Judge Underwood & Genl [General] Hardin has gone out; the Indians have great confidence in these gentlemen, particular the former, and I have


Page: [2]
no doubt but they will give them their opinions candidly, and advise them to accede to the propositions submitted by the president, or suggest others, if they object to those already submitted.
I deem it important that you should be in possession of the earliest authentic information from the council, I have therefore requested Coln [Colonel] Williamson to attend it as soon as it adjourns he will come to Milledgeville and give you all the particulars. should the Council determin [determine] not to meet commissioners of the U. [United] States to adjust this perplexing business, I will have the honor of answering your enquiries in a subsequent communication.
I have done all in my power to prevent the evils of which Majr [Major] Curry complains but am not sufficiently acquainted with the laws on this subject to suggest any alteration.
I have not the slightest apprehension that we shall meet with any opposition from the Indians, in any event, Mr. [unclear text: Chester ] s opinion to the contrary notwithstanding. should such a thing be agitated I think the better informed would immediately suppress it, or give such information as would enable us to prevent the contemplated mischief. we have frequently received information of the hostile disposition of


Page: [3]
the Indians, and that they intended to set the laws of the state at defence [defense], but after much labour [labor], and expence [expense], we have found no ground for such reports. In no instance have we found the least disposition on the part of the Indians, to resist the state authorities.
If you determin [determine] to grant lands in the gold region as soon as they are drawn, it will be necessary to review the laws on trespass, and if the penalties are not sufficient they should be made so, and the drawer should be compeled [compelled] to register his name in this office, and the number, or numbers he intends operating upon before he begins his labour [labor], to enable us to determine who are trespassing, and who are not.
My account of the disbursements for the third quarter shall be made out pursuant to your directions.

I have the honor to be most respectfully your Excellencys Obdt Servt. [Obedient Servant]
[Signed] Jno [John] Coffee.
To His Excellency Wilson Lumpkin. Milledgeville. 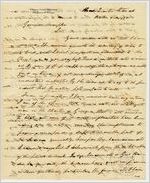