Communications from Genl. [General] Coffee of the 7th. Instant
Ordered to be filed
14 July 1832.


Head Quarters Etowah
July 7th 1832.
Governor Lumpkin
Sir;
The men sent out, (pursuant to your instructions;) to assertain [ascertain] the progress the surveyors are making have all returned. I have the honor of inclosing [enclosing] you the reports of such as have not completed their labours [labors], or, will complete them in a short time; except the 3rd. and 13th. districts in the first section. from the best information I am able to obtain, I expect those gentlemen will not finish their districts before
september. The land districts are all completed, or will be in a verry [very] short time, except the 19th in the 1st. Section, a small fractional district. The two gentlemen surveying the 4th. will proceed in a short time to the 19th and completed as early as possible. say in all the month of
August. should your excellency be of opinion that the public interest will be promised by drawing the land lottery as early as the middle of
September, by convening the commissioners, and letting them prepare the tickets of such districts as are completed, I think you may calculate confidently that the last will be finished by the time the commissioners should want them.

I have the honor to be most respectfully your Obdt Servt. [Obedient Servant]
[Signed] Jno [John] Coffee.
To His Excellency Wilson Lumpkin.


Camp Glascock
25th June 1832
Sir
In Reply to your circular presented to me through Sergt. [Sergeant] Young I have to inform you that I have only Completed about two thirds of my Parrellels [Parallels] have now Started two sets of Surveyors & consequently Expect to finish by the Last of
July. I think by the
fifteenth I shall be able to furnish a [illegible text] & Plat So that the Lottery may be prepared. I am at present Sick and if I do not Get Better Shortly Shall Employ a Second assistant


Head of Highwassee
June 26th 1832
Sir
in reply to your Circular presented to me through Sergt. [Sergeant] Young I have to inform you that I have finished my Eleventh [unclear text: Meridinal ] line. I expect to finish in two weeks so that against the
tenth of August, I hope to Make my return to the Executive.


Head of Brasstown 17 Dist. [District] 1st Section
June 27th
Sir
I reply to your Circular presented to me through Sergt [Sergeant] Young I have to inform you [added text: that I have ] 7 lines to run which I expect to finish by the
7th of July & expect to make my return as as [as] soon there after as possible. My Dist [District] contains two hundred & twenty four lots


Sir
In reply to your note of the
23rd June Inst. [Instant] -- I reply, that I expect to finish surveying on tomorrow and Shall perform the balance of my duty as soon there after as possible, but cannot tell precisely when,


Head of Toccoy
June 30th 1832 11th District first sec
The time I expect to be able to complete the survey of District no [number] Eleven untill [until] went round the Same I have two hundred lots Surveyed their [there] will be twelve hundred and ninety Six lots in the District numbered from 1 to 1296 inclusive
by the
first October next And as soon thereafter as I am able I Shall make my return to the Surveyor Genl. [General]

I have the Honor to be your Obedient & Humble Servant
[Signed] Henry Hagin Surveyor 11 Dist. [District] 1 Section
Genl. [General] John Coffee
N B [Nota Bene] for the kind of Country I have to work in I refer for you to Lieut. [Lieutenant] Young
[Signed] H. H. [Henry Hagin]

Sergt [Sergeant] Young represents Mr Hagins district to be the worst in the purchase. 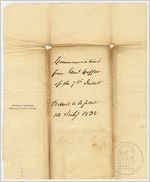