Collection:
Southeastern Native American Documents, 1730-1842
Title:
Letter, 1832 June 12, Etowah, [Cherokee Nation] to Wilson Lumpkin, Governor [of Georgia], Milledgeville, Georgia / Gen[era]l John Coffee
Creator:
Coffee, John, 1782-1836
Date of Original:
1832-06-12
Subject:
Cherokee Indians--Treaties
Cherokee Indians--Government relations
Cherokee Indians--Crimes against
Gold mines and mining
Location:
United States, Georgia, 32.75042, -83.50018
Medium:
official reports
Type:
Text
Format:
text/html
image/jpeg
Description:
This is a letter dated June 12, 1832 from General John Coffee in Etowah to Wilson Lumpkin, Governor of Georgia (1831-1835), regarding recent events in the Cherokee Nation. Coffee promises the governor an official report of the recent murder of an Indian, and he makes reference to affidavits forwarded by Major Jones. Coffee also complains of his small force being divided up to cover a large piece of territory, and he warns that he can prevent neither Indians nor white men from violating the law and digging for gold in the area. He notes that two white men had been arrested the week before for that offense and some people running mills along the Chestatee River have been cutting away too much timber, rendering the land on the west bank of little or no value. He ends the letter by saying that he has learned that the prospect of signing a treaty with the Cherokees has worsened and refers to a Cherokee delegation returning from Washington, D.C.
Digital image and encoded transcription of an original manuscript, scanned, transcribed and encoded by the Digital Library of Georgia in 2001, as part of GALILEO, funded in part by a grant from the Institute of Museum and Library Services.
Local Identifier:
tcc713
Metadata URL:
https://dlg.usg.edu/record/dlg_zlna_tcc713
Digital Object URL:
https://dlg.usg.edu/record/dlg_zlna_tcc713#item
Language:
eng
Bibliographic Citation (Cite As):
Cite as: [title of item], Telamon Cuyler, Hargrett Rare Book and Manuscript Library, The University of Georgia Libraries, presented in the Digital Library of Georgia
Extent:
4 pages/leaves
Original Collection:
Manuscript held by the Hargrett Rare Book and Manuscript Library, The University of Georgia Libraries, Telamon Cuyler, box 01, folder 46, document 18.
Holding Institution:
Hargrett Library
Rights:


Head Quarters Etowah
June 12th 1832.
Governor Lumpkin
Sir;
Your two letters dated the
19th &
21st May arrived just as I was setting out for camp Glascock, (our upper station) nothing having occured [occurred] during the previous week of sufficient importance to trouble you with, I declined writing untill [until] I returned, which was last eavening [evening], when I had the honor of receiving yours of the
26th May.
The official report of the death of [deleted text: the death of ] the Indian, shall be furnished your excellency, as soon as I can see Esqr [Esquire] McConnell and obtain it.
The association referred to in the affidavits forwarded by Majr [Major] Jones, is composed of many highly respectable persons as I am informed, and if it had been prudently conducted, and its members confined to respectable & prudent men, it might have done much good in the country where it was organized. but like all other similar associations


Page: [2]
as their numbers increased some men were admitted of less prudence, and respectability, and their acts have partaken consequently of their character; some of their resent [recent] acts, are much to be regretted.
Located as I am from fifty, to eighty miles from the scene of their operations; and having been compeld [compelled] to divide my little force into five parts for the purpose of covering, and protecting a territory, upwards of an hundred miles in lenghth [length], and from fifteen to twenty in breath [breadth] it is entirely out of my power to prevent a violation of the laws in this respect, unless I almost entirely abanden [abandon] the mines to the Indians, and the more unprincipaled [unprincipled] white men. all that I can do is to aid the [illegible text] if they should attempt to resist him in the execution of his office, and this I understand they have no idea of doing. I will immediately dispatch a letter to some of the principle [principal] persons [deleted text: that ] [added text: who ] I understand are ingaged [engaged] in this business, & give them extracts from yours, which I hope will produce the desired effect. during the last week we arrested two white men for the offence [offense] of digging gold and had them bound over to court.
some persons owning Mills on the Chestatee river are cutting timber from the west bank to an extent


Page: [3]
that will render valueless the lands it being verry [very] poor and worth nothing but for the timber. I wrote them a mild & friendly order, requesting them to desist, this brought on me abuse & threats; I saw one of the persons yesterday, he admitted that it was morally rong [wrong], but as there was no written statute against it, he insinuated that he should continue the trespass, I hope you will instruct me what course I shall persue [pursue] with such persons. I refer you to Coln [Colonel] Williamson for the substance of the conversation. I regret to learn that the prospect of a treaty with the Cherokees is less flattering than it has been, I hope however as soon as the [document damaged] [added text (appears to be different hand and ink): [delegation] ] returns it will again brighten.
You will be so kind as to furnish Col [Colonel] Williamson with a draft on the proper department for three thousand dollars, for the purpose of paying the troops the 2nd quarter, and purchasing forage &c [et cetera] . 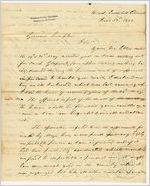