Collection:
Southeastern Native American Documents, 1730-1842
Title:
[Letter] 1832 May 13, Etowah, [Cherokee Nation] to Wilson Lumpkin, Governor [of Georgia], Milledgeville, Georgia / Gen[era]l John Coffee
Creator:
Coffee, John, 1782-1836
Date of Original:
1832-05-13
Subject:
Cherokee Indians--Government relations
Surveying
Gold mines and mining
Location:
United States, Georgia, 32.75042, -83.50018
Medium:
official reports
Type:
Text
Format:
text/html
image/jpeg
Description:
This is a letter dated May 13, 1832 from General John Coffee in Etowah (Cherokee Nation) to Wilson Lumpkin, Governor of Georgia (1831-1835). Coffee reports that Colonel Williamson has not yet found the persons accused of illegally digging gold near the Carroll County line, so he proposes to station Sergeant Ray and a small detachment in the area to deter any further activity. He goes on to report that a Mr. Tait recently killed an Indian for stealing hogs. Coffee says that he regrets the incident and does not yet know if other Indians in the area will attempt to avenge this death. He cites this concern as yet another reason for stationing Sergeant Ray and his detachment in that area. Coffee closes the letter by noting that most of the surveys of the Cherokee land in northern Georgia are going well.
Digital image and encoded transcription of an original manuscript, scanned, transcribed and encoded by the Digital Library of Georgia in 2001, as part of GALILEO, funded in part by a grant from the Institute of Museum and Library Services.
Local Identifier:
tcc712
Metadata URL:
https://dlg.usg.edu/record/dlg_zlna_tcc712
Digital Object URL:
https://dlg.usg.edu/record/dlg_zlna_tcc712#item
Language:
eng
Bibliographic Citation (Cite As):
Cite as: [title of item], Telamon Cuyler, Hargrett Rare Book and Manuscript Library, The University of Georgia Libraries, presented in the Digital Library of Georgia
Extent:
4 pages/leaves
Original Collection:
Manuscript held by the Hargrett Rare Book and Manuscript Library, The University of Georgia Libraries, Telamon Cuyler, box 01, folder 46, document 17.
Holding Institution:
Hargrett Library
Rights:


Head Quarters Etowah
May 13th 1832
Governor Lumpkin
Sir,
In my last I informed you that we had received information that a collection of out Laws [outlaws] were digging Gold near Carroll line, and that they intended to resist the State Authorities.
I learn from Col. [Colonel] Williamson who was Sent to arrest them that after making a laborious examination (accompanied by the persons he had procured as pilots) he has not been able to discover the Slightest traces of any violation of the laws on this subject.
The Sixes Mines are situated about midway between this place and Camp Lumpkin, (twenty five miles from each) which makes it verry [very] laborious to Guard them from either place; I have determined to detach Sergt. [Sergeant] Ray with a Small Command, and station him in the immediate neighborhood, this is the only way we can entirely suppress the digging, and will afford the best oppertunity [opportunity] of apprehending the aggressors.
It is Col. [Colonel] Williamsons dicided [decided] opinion that the work at these mines is conducted by white men, and he has a Strong reason for this opinion -- For sometime past it has been


Page: [2]
necessary to make almost daily excursions to the mines in this neighborhood to prevent a violation of the Laws.
I regret to inform your excellency that an Indian was Shot & Killed on wednesday by Mr Tait a respectable Citizen [added text: living ] about half way between hightower & chattahoochie on the road leading from the Shallow Ford to Salley Hughes --
These are the circumstances as I understand them. Mr Tait had for sometime been missing his Hogs, on Wednesday morning they run home and two Dogs after them, one of which he Shot, on examining the Hogs, one of the largest was missing -- He then in Company with another gentleman took their back track and after going about two miles, they came upon three Indians cleaning the Hog in the Side of a Pond, one of which they succeeded in taking: He was carried before a Justice and committed to Jail. After he was Committed he induced Tait & his Companion to take him back, under a promise that he would shew [show] the other two Indians -- after following him some time, they believed he was trying to impose on them. They abandoned a further search, and commenced their return to the Justices, when within about a mile of his House, the prisoner broke to make his escape, and after running forty or fifty yards he received a Mortal wound from Taits Rifle, and expired in a Short time -- I expect to see


Page: [3]
Esqr [Esquire] McConnell tomorrow, and obtain an official statement of the case.
Should it differ materially from the foregoing, you shall be informed -- I regret that this should have happened. Whether the Indians will attempt to avenge his death I cannot Say -- this is an additional inducement for Station [added text: i ] ng Sergt [Sergeant] Ray in that neighborhood. I Shall endeavour [endeavor] to have an inquest held on the body. that we may be able to Contradict any misrepresentation of the matter --
As far as I am able to learn the Surveyors are all going on. Some remarkably well, others not so well on account of the Mountains, but not the slightest resistance on the part of the natives. Other matters are progressing to my entire satisfaction, and I Know to yours --

I have the Honor to be most Respectfully your Obt. Servt. [Obedient Servant]
[Signed] Jno. [John] Coffee
To his Excellency Wilson Lumpkin Milledgeville 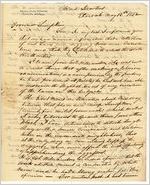