Collection:
Southeastern Native American Documents, 1730-1842
Title:
Letter, 1832 Feb. 18, Etowah, Ch[erokee] Na[tion], to Wilson Lumpkin, Governor of Georgia, Milledgeville / John Coffee
Creator:
Coffee, John, 1782-1836
Date of Original:
1832-02-18
Subject:
Cherokee Indians--Treaties
Cherokee Indians--Relocation
Location:
United States, Georgia, 32.75042, -83.50018
Medium:
letters (correspondence)
Type:
Text
Format:
text/html
image/jpeg
Description:
This is a letter dated February 18, 1832 from John Coffee in Etowah (Cherokee Nation) to Wilson Lumpkin, Governor of Georgia (1831-1835), promising the governor that the Indians preparing to emigrate will be provided with the necessary protection to ensure their safe arrival at the Cherokee Agency. Coffee also says that more and more Indians in the area (near the mines in northern Georgia) are agreeing to leave peacefully and that a delegation of Cherokees currently in Washington have encouraged them to enter into a treaty providing for a mass emigration.
Digital image and encoded transcription of an original manuscript, scanned, transcribed and encoded by the Digital Library of Georgia in 2001, as part of GALILEO, funded in part by a grant from the Institute of Museum and Library Services.
Local Identifier:
tcc706
Metadata URL:
https://dlg.usg.edu/record/dlg_zlna_tcc706
Digital Object URL:
https://dlg.usg.edu/record/dlg_zlna_tcc706#item
Language:
eng
Bibliographic Citation (Cite As):
Cite as: [title of item], Telamon Cuyler, Hargrett Rare Book and Manuscript Library, The University of Georgia Libraries, presented in the Digital Library of Georgia
Extent:
3 pages/leaves
Original Collection:
Manuscript held by the Hargrett Rare Book and Manuscript Library, The University of Georgia Libraries, Telamon Cuyler, box 01, folder 46, document 11.
Holding Institution:
Hargrett Library
Rights:


Head Quarters Etowah
February 18th 1832.
Dear Sir;
Your favour [favor] of the 2nd Inst [Instant] has been received. You may rest assured that every protection will be afforded the emigrating Indians that may be necessary to ensure their safe arrival at the agency unmolested, and I am happy to have it in my power to say, that the disposition to emigrate, from all the information I am able to collect, is rapidly increasing and I have no doubt but it will continue to increase should the office be kept open, but I hope a general arrangement will soon be made for their emigrating in mass. I have been informed by respectable authority that the delegation now at Washington, have written to their friends in this Country, that they have been advised by their frinds [friends] in congress to treat; that the moderate men of the administration party had advised them to the same course, that the administration would be sustained in [illegible text] the


Page: [2]
course it had prepared in Indian matters. should this be the case I think we may confidently look to a speedy settlement of this embarressing [embarrassing] business. should you be in possession of any information on this subject, not improper to be communicated I should be happy to receive it.

I have the honor to be most respectfully your Obdt Servt. [Obedient Servant]
[Signed] Jno [John] Coffee
To his Exelency [Excellency] Wilson Lumpkin Milledgeville 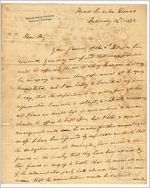