Department of War,
6th. Septemr. [September] 1830.
To His Excelly. [Excellency] Geo. [George] R. Gilmer, Milledgeville, Ga
Sir,
I have the honor to acknowledge the receipt of your letter of the
23rd August. In compliance with the request therein contained, I enclose, herewith, a copy of the report of Genl. [General] Coffee, and a copy of the map which accompanied it, shewing [showing] the line fixed on by him as the true boundary between the Cherokee and Creek Indians. These, with the letter of the Secretary of War to you, of the
1st June last, stating that the report of Genl. [General] Coffee had been confirmed by the President, it is presumed will give all the information required on the subject. Should anything further be necessary, your Excellency's requests [deleted text: on the subject ] will receive prompt attention. 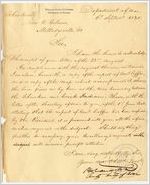