Department of War
January 17 1822.
Sir,
I have received the letter addressed to me by yourself Mr. Talbot and General Adams recommending Mr Cuthbert as a Commissioner to hold Treaties with the two Nations of Indians within the limits of Georgia, should the measure be sanctioned by Congress. In that event it will afford me pleasure to lay Mr Cuthberts name before the President, as well from the respectable source whence the recommendations come, as from my own knowledge of his worth.
It would seem from the [unclear text: tenor ] of your letter that you had forwarded the renewed proceedings of the Legislature on this Subject. By reference to my files I do not however find any, except those transmitted by you on the
26th of November last, which I answered on the
25th December.

I have the honor to be your Obed Sr [Obedient Servant]
[Signed] J. [John] C. Calhoun
His Excy [Excellency] John Clarke Govr [Governor] of Georgia 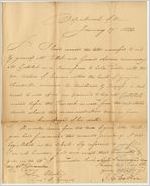