Collection:
Southeastern Native American Documents, 1730-1842
Title:
[Letter] 1826 May 18, Washington, [D.C. to George] Troup, Gov[ernor of Georgia] / J[ohn] Macpherson Berrien
Creator:
Berrien, John MacPherson, 1781-1856
Date of Original:
1826-05-18
Subject:
Creek Indians--Treaties
Treaties--Ratification
Creek Indians--Government relations
United States. Congress. Senate
Location:
United States, Georgia, 32.75042, -83.50018
Medium:
letters (correspondence)
Type:
Text
Format:
text/html
image/jpeg
Description:
This is a letter dated May 18, 1826 from John Macpherson Berrien, U.S. Senator from Georgia, to George Troup, Governor of Georgia (1823-1827), regarding the continued deliberations of Congress on the Treaty of Washington, D.C. with the Creeks. Berrien reports that when the appropriations bill associated with the treaty came under consideration, it was discovered that a "corrupt" agreement had been made to deliver the majority of the funds to the McIntosh delegation (those Creeks associated with the late William McIntosh). Berrien informs Troup that he is a member of a committee appointed to investigate the matter and laments the continued association of the treaty with fraud and partisanship. This letter is related to tcc685 tcc686 tcc687 and tcc688.
Digital image and encoded transcription of an original manuscript, scanned, transcribed and encoded by the Digital Library of Georgia in 2001, as part of GALILEO, funded in part by a grant from the Institute of Museum and Library Services.
Local Identifier:
tcc689
Metadata URL:
https://dlg.usg.edu/record/dlg_zlna_tcc689
Digital Object URL:
https://dlg.usg.edu/record/dlg_zlna_tcc689#item
Language:
eng
Bibliographic Citation (Cite As):
Cite as: [title of item], Telamon Cuyler, Hargrett Rare Book and Manuscript Library, The University of Georgia Libraries, presented in the Digital Library of Georgia
Extent:
2 pages/leaves
Original Collection:
Manuscript held by the Hargrett Rare Book and Manuscript Library, The University of Georgia Libraries, Telamon Cuyler, box 01, folder 19, document 04.
Holding Institution:
Hargrett Library
Rights:


Washington
18th May 1826
My Dear Sir,
When the bill making appropriations for carrying into effect the Creek treaty, came before the Senate they [deleted text: have ] had received information of the existence of a corrupt agreement between the members of the [added text: Creek ] delegation here for the appropriation of a very great part of the money to be received under the treaty to themselves, and to a few selected favorites- In consequence of this, an amendment was adopted by the Senate to the appropriation bill, providing in substance, that the whole amt [amount] should be paid under the special directories of the Secretary of War, in the proportion and manner in which annuities are paid -- When this amendment came to the knowledge of the department of War the Secretary repaired to the Senate Chamber, and remonstrated against it, as [deleted text: not ] transcending the power of Congress, and I understand made similar remonstrances to a member or members of the House of R [Representatives] -- The house disagreed to the amendment [added text: of the Senate & invited ] [deleted text: & appointed ] a conference, which was agreed to. The committee of conference on the


Page: [2]
part of the House Messrs McLean of Del [Delaware] : Dwight and McDuffie- on the part of the Senate Messrs Benton, Van Buren & Berrien -- That Committee had several meetings, and [deleted text: that ] the result was the Report which I now send you. It will be taken up tomorrow, and I do not doubt will Eventuate in some provision by which the contemplated fraud will be prevented -- It has produced much excitement here- and fixes indelibly on the present treaty, the fraud which was imputed to, but not proved against the former treaty -- and that in a much greater degree, than was even imputed to that negociation [negotiation] -- I will take care to advise you of the further progress of this affair --

and I am very Respectfully and truly yrs [yours]
[Signed] Jn: [John] Macpherson Berrien
Gov: Troup 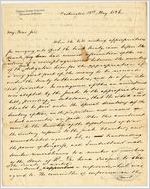