Collection:
Southeastern Native American Documents, 1730-1842
Title:
Letter, 1787 Aug. 18, Flint River, [to Governor of Georgia, George Mathews?] / Tim[oth]y Barnard
Creator:
Barnard, Timothy, 1745-1820
Date of Original:
1787-08-18
Subject:
Creek Indians--Crimes against
Creek Indians--Warfare
Creek Indians--Government relations
Location:
United States, Georgia, 32.75042, -83.50018
Medium:
reports
accounts
Type:
Text
Format:
text/html
image/jpeg
Description:
This is a letter dated August 18, 1787 from Timothy Barnard, an Indian trader and possibly an agent to the Cusseta (Creek) Indians, probably written to Governor George Mathews (Governor of Georgia, 1787-1788). Barnard tells the governor that he has relayed the latter's recent letter and talk to the Indians, and he mentions that he was present along with the Fat King (Neha Micco) and other head men of the Lower Creeks when their talk was written. Barnard says that the Indians are bent upon revenge for the killing of some of their friends, and he warns of anticipated attacks on the frontier. He goes on to point out his own great expense, in loss of both time and money, in serving as a liaison between the Indians and the state government, and he asks the governor to compensate him for his troubles.
Digital image and encoded transcription of an original manuscript, scanned, transcribed and encoded by the Digital Library of Georgia in 2001, as part of GALILEO, funded in part by a grant from the Institute of Museum and Library Services.
Local Identifier:
tcc675
Metadata URL:
https://dlg.usg.edu/record/dlg_zlna_tcc675
Digital Object URL:
https://dlg.usg.edu/record/dlg_zlna_tcc675#item
Language:
eng
Bibliographic Citation (Cite As):
Cite as: [title of item], Telamon Cuyler, Hargrett Rare Book and Manuscript Library, The University of Georgia Libraries, presented in the Digital Library of Georgia
Extent:
3 pages/leaves
Original Collection:
Manuscript held by the Hargrett Rare Book and Manuscript Library, The University of Georgia Libraries, Telamon Cuyler, box 01, folder 11, document 08.
Holding Institution:
Hargrett Library
Rights:


Flint river
18th augt [august] 1787
Sir
Yesterday I was honnoured [honored] with your [added text: letter ] and talk to the indians by my negroe [negro] Express. I being presant [present] my Self at the time that the talk was wrote by desire of the fat King and rest of the head men of the lower creeks that went down by my negroe [negro], and observing the disposition of the indians at that time and the grea [added text: t ] desire they Seemed at that time to have [added text: for ] satisfaction for there [their] lost friends, made me think it necessary to inform your honnour [honor] to put the inhabitants near the frontiers on their gaurd [guard], since I have Seen your honnours [honor's] answer in answer to the Indians talk wich [which] will Seem to them So far from Granting them their requisition I am almo [added text: st ] convinced that thier [there] will be hostilityes commited [hostilities committed] and that I fear very Soon, therefore take the Earlyest [Earliest] opportu [added text: nity ] to acquaint your honnour [honor] that it will be highly necessa [added text: ry ] for all the inhabitants from the mouth of alatamaha up to be in as good a posture of defence [defense] as possible, as no one can tell where they may make there [their] first attempt but [unclear text: unduptedly [undoubtedly] ] where they Expect the least opposition when I wrote your honnour [honor] last I mentioned that there was a large party of the upper creeks had gone oute [out] agains [added text: t ] cumberland, wich [which] I am informed Since chief of them are


Page: [2]
returned and done no mischief, how they got disappointed I have not heard, I Set of [off] tomorrow for the cussetaws with your talk to the indians, and if fear to begin a [illegible text] and Studdeying [Studying] the good of their nation should work on their minds to decline seeking revenge and I can Observe that they are unanimously desposed [disposed] for peace shall be down my Self in twenty five days from this with there [their] [unclear text: purposals [proposals] ] if I find they begin to turn oute [out] Shall make the best of my way down to georgia low down if I cannot git [get] down that way, must goe [go] round by St augistene as [added text: I ] begin to find that if once they begin it will be hard to goe [go] down any of these upper paths and at any rate they doe [do] not wish to let me goe of [go off] if they can help it. --
I have first to begg [beg] your honnours [honor's] excuse for mentioning to you that Since I had the honnour [honor] of being intrusted [entrusted] with the business respecting the indians for the state of Georgia in conjunction with Mr. John galphin I have had the whole burthen [burden] on my self, and have been oblidge [obliged] to devote chief of my time that way, on account of wich [which] I have incurred Several Costs, besides Expences [Expenses] [illegible text] indians [illegible text] and buyeing [buying] horses when I was down express at augusta my people all got frighted [frightened] and fled of [off] from the nation lost killed and [unclear text: tired ] many of my horses dammaged [damaged] a great part of [illegible text] horse loade [load] of deer skins weting [wetting] them in the rivers and letting them rot as they march all day and some part of the night


Page: [3]
thinking their danger greater than it is was these losses will bring me consideralbly [considerably] in dept [debt] to the gentlemen I deal with as owing to neglect of my business shall be able to make but very small return for a very considerable cargoe [cargo] of goods I bought las [last] winter if I have been but of little service to the state it has not been my fault as I belive [believe] in the presant [present] critical situation of affairs no one could have effected any thing better, as I have been always happy to Serve my contrey [country] in this Quarter as far as my small abilityes [abilities] would admit of. I make bold to begg [beg] as a Singular favour [favor] of you honnour [your honor] to lay my case before the two honnole. [honorable] houses [illegible text] and assembly wich [which] I make no doupt [doubt] will be moved to make me a reasionable [reasonable] compensation for my Small Services and losses, what ever is thought I am deserveing [deserving] of could be made a Satisfactory payment to mesers [messieurs] clarke Elbert and Compy. [Company] would be the same to me as gold down some of the lower town indians has been down to pensacola a few days agoe [ago] and has brought up a large supplye [supply] of am [added text: munition ] wich [which] they say they received from his Excellency Governor Oneal nothing more at presant [present] occurs to me worth mentioning to Your honnour [honor] but that from Every presant [present] circumstance have reason to expect the savages will in a Short time be very outerageous withoute [outrageous without] Some very unexpected turn Should take place
I therefore conclude with wishing your honnour Sucksess [honor Success] and remain with due respect your honnours [honor's] most Obdt hble Servt [Obedient humble Servant]
[Signed] Timy [Timothy] Barnard 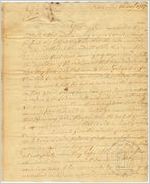