Mayor William Hartsfield's film of the world premiere of Gone with the Wind in Atlanta in 1939.

Description
The footage, in its original format, is one reel of black and white acetate 16mm film. The film is edited from several individual reels and includes title and story cards. The first several minutes of the film capture the arrival of the principal actors and studio executives as they disembark at Atlanta Municipal Airport and proceed down the streets of Atlanta. There are many close-up shots of principal actors including Olivia De Havilland, Vivien Leigh, Clark Gable, Ona Munson, and Laura Hope Crews. The director, David O. Selznick, is pictured along with Carole Lombard, wife of Clark Gable, and Laurence Olivier, companion of Vivien Leigh. The next several minutes capture the ball hosted by the Atlanta Junior League. The film shows guests arriving, some in Civil War period costume, and dancing to music by a live band. The final minutes of the film capture some of the principal actors touring the Cyclorama, the site of the Battle of Peachtree Creek, and a residential area as well as the arrival of guests for the movie premiere., William Berry Hartsfield (1890-1971) served as Mayor of Atlanta 1937-1962. He served on the Atlanta City Council from 1923-1928 and represented Fulton County in the state legislature. Hartsfield was Mayor of Atlanta in 1939 when the city hosted the premiere of Gone With the Wind, the movie based on the novel by Margaret Mitchell (Marsh). The film Gone With the Wind, based on the novel by Margaret Mitchell (Marsh), premiered in Atlanta, Georgia, on December 15, 1939. 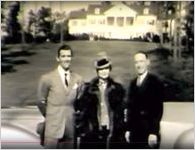