Flood of the century: southwest Georgia

Jor six
Albany James H. Gray Civic Center
REF 975.8 FLO GO.RM.
Flood of the century :
In
Dougherty
County,
23 squore
miles of
land uliqs
flooded.
Flashback
1994: The Beginning
Volunteers to The rescue
The Months Ahead
On Sacred Grounds
Markers..............................
Fall from Antediluvian Grace
Flood................................
Rumors...............................
Three days up a Tree
The Flint River
crested at a
record 44 feet;
the crest of the
Flint at flood
stage is
21 feet.
PUBLISHER/ART DIRECTOR-
DESIGNER...............
MICHAEL BROOKS
Chong Na
PHOTOGRAPHY................................ MICHAEL BROOKS/MARC HEDGES
Shawn Hirst/ William R. Kicklighter
Writers..
Vic Miller/K.K. Snyder
ulf Kirchdorfer
Literary Advisor-
editor...........
Vic Miller/K.K. Snyder
Lou Emond
LTSS COUNTY LTTA.NY
Ph. (912) 7
Post Office Eox 49
Leesburg, Georgia 317^
BROOKS PUBLISHING
1 120 West Broad Avenue Albany Georgia 31707 (912) 888-0035
<3)1994 Brooks Publishing reserves all copy rights. Reproduction in part or in
whole is prohibited without written permission
8500
residents
have been
flooded in
Dougherty
County alone.
Only 600
had flood
insurance.
wise man loses nothinc
Flood of The Century
by K.K. Snyder
"This is not a drill: please evacuate your home immediately. Take as
few of your belongings as possible. You're home may soon be under
water. Act quickly. I repeat, this is not a drill."
For thousands in Dougherty, Lee and surrounding counties,
evacuating their homes and losing everything they own to the
relentless ravaging flood waters of the 1994 flood will be the worst
experience of their lives. Though the murky waters have receded in
most residential areas, streets are haunted by the sights and smells
of a destructive mother nature. Thousands still remain in shelters
having nothing left to go home to. Displaced caskets are tied to
trees and stored in hopes of possible identification so that they may
be laid to rest once again.
Flashback: 1925
The Flint River spills over its banks taking homes and lives
with it. People rush to stores to hoard supplies, hoping to wait
out this disaster. Residents buy every oil stove available in Albany
that January 20th because of the closing of the gas plant as a
safety precaution. All trains from the north are stopped to prevent
the railroad cars from plunging into the Kinchafoonee Creek
where the bridge has washed out. The public committee has only
400 meals to serve to displaced survivors during the entire ordeal.
The Flint crests at 37.8 feet- a record that stands until 1994.
1994: The Beginning
It was the 4th of July weekend. Friends and families
joined for cook-outs and parties in celebration of the
country's independence. Weather channels were centering
on the newly developing tropical storm, Alberto. Residents
of Florida were warned of the possibility of a hurricane, but
luckily lives were spared. As the depression stalled over the
southeast, the rains began to fall. Inches of the wet drops
filled our river and creeks as well as those to the north of
Albany. Flash flood warnings were being aired for certain
areas, but no one could foresee the flood that would
eventually destroy lives, homes, and farmland.
The Macon area was first to be hit by this catastrophe,
taking eight lives in a short time. Albany engineers then
began to calculate the effect these rains would have on the
Flint River. Not even the preciseness of mathematics could
predict the vast area that would ultimately be flooded.
Disaster next struck Sumter County. Americus received
a record 21 inches of rain in one day. Another seventeen
lives were lost July 6th as cars plunged off the washed out
roads, their drivers traveled unaware of the dangers that lay
ahead. The city of Americus became isolated as road
closings multiplied.
Officials of Dougherty County and the City of Albany
were warned of the impending flood, with estimates setting
the crest of the Flint River at 37 feet. By the next day, the
river had surpassed the engineers' figures and was at 41 feet,
already 20 feet above flood stage. This was the first day of
official evacuations, which would eventually extend to areas
residents would never have believed to be in the flood plain.
The ominous river water rushed into areas quickly, necessi-
tating rescues from tree branches and the rooftops of homes.
Rains were still falling, the river and the creeks still rising.
The first deaths were recorded for the city of Albany as
2000
people
uuere put
out of
work by
the flood.
two children lost their lives in the murky waters when their
family's car was washed into the river. The Flint was now
measuring 43 feet and still rising. All main bridges in Albany
were closed, and the east and west sides of the city were
separated by raging waters, leaving each side to its
own defense.
Volunteers had already streamed into the area to assist
with evacuations, rescues, sand bagging, and the over-full
shelters. Shelters were opening in increasing numbers in the
county's schools and churches. The National Guard was
brought in as well as the Marine Corps personnel from MCLB
in Albany. Members of the DNR as well as State Troopers
were also on the scene to do whatever needed to be done.
Unfortunately, many optimistic residents who attempted to
defend their homes from floodwaters had to be rescued by
the many heroes of this tragic event. By July 9th, 30 shelters
were in operation in Albany alone, filled with the more than
Photo: Shawn Hirst
The Rlbony
Humane
Society
sheltered
over 800
animals
during the
flood weeks.
Ifticri': 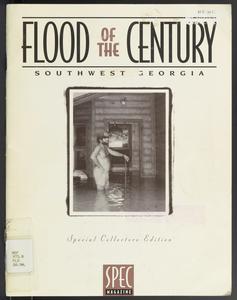