Garrison Chas Mathews Val. Walker Groves Wm Mathews R. Walker Harden Mitchell Wimberly
McConnell Woods, Of the Bard of Trustees President Waddel. Messrs Clayton Messrs Cuthbert
Meriwether Harris Upson and Campbell Harden
(143)
Read the minutes of the last meeting of the Senatus Academicus Received and read the reports of the Senators on the state of the County Academies and
Literature in general from such as had written Reports, and heard verbal accounts from others Adjournment till 3. Oclock to-morrow The Senatus Academicus convened as adjourned The Governor being absent from indisposition, The Hon. Mathew Talbot the President of
the Senate was called to the Chair. Received the Reports from the President and Treasurer of the University which were read and approved of Mr. Campbell offered the following Resolution, which was agreed to Resolved That the several Reports which have (been) made to the Senatus Academicus at this meeting be by the Secretary communicated to the Legislature The Senatus Academicus then adjourned Sine Die Qoud (sic) Attestor Matthew Talbot Asbury Hull
Secretary
(144)
Milledgeville 12 Nov 1821 Senate Chamber, This being the day appointed by law for the meeting of the Senatus Academicus, the
following members, attended, viz of the Board of visitors. His Excellency Govr Clark Honourable Mathew Talbot. Pres Sen Hon. David Adams. Speaker H. Rep (145)
Mr. Adams Mr. Henly
Allen Jackson, Jefn
Beasley James
Beck Little
Blackshear Mitchell., (Clarke)
Brown Mitchell. Morgan
Burton Mitchell. Jones
Cleaveland O Neal
Crawford Parks
Dunham Reid
Eberhart Ryan
Harden Scearcy
Wimberly Stevens
Woods Stocks
of the Board of Trustees
President Waddel
Mr. A. S. Clayton Mr. Harris
G. R. Clayton Harden
Campbell Paine
Cuthbert Meriwether
Upson 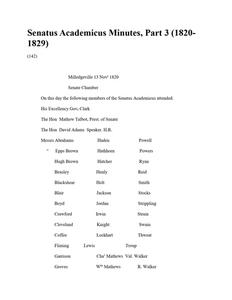