Fifth annual report of John H. Wheaton, mayor of the city of Savannah for the year ending December 31, 1881 : to which is appended the city treasurer's report and the reports of different departments of the city government 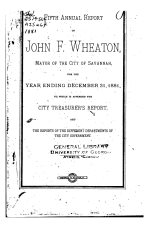