Maj [Major] Genl [General] Winfield Scott Com [Commander] in Chief [unclear text: A ]
Sir,
In relation to a small claim I have presented for payment for expenses incurred in carrying out the policy adopted by Col Wm [William] S. Foster to punish the murderers and Outlaws of Charleys band who in
November 1838 murdered two of the soldiers belonging to the 4th Infantry, it becomes necessary that I should be furnished with answers to the following interrogatories which when convenient you will confer a favor on me by furnishing.
1st [First] Do you recollect having an interview with Col Foster and me at your [unclear text: room ] in Athens Tennessee in
November 1838 shortly after the above murders were committed, 'if so' do you recollect employing me to aid Col Foster in capturing the murderers and preventing other Cherokees from uniting with them by procuring the aid and influence of a Chief by the name of Euchella and the services of his band of Warriors.
2d [Second] By the reports of Col Foster does it appear that I performed the duties assigned me; And that by the influence of Euchella and the aid furnished by the Cherokee Warriors who accompanied him that Charley and his band were captured. The Guilty tried and punished and the [unclear text: inscent [innocent] ] not condemned removed to Tennessee by Col Foster.

3d [Third] From the information you received as to the situation of the country the murderers were concealed in, and its being in accessible to the white troops; do you not believe a large amount of money was saved to the Government by the aid furnished by Euchella and his band in completing the emigration and punishing the murderers which enabled Col Foster to restore peace to the Country and remove the troops under his Command to the Western Frontier.

Head In. [Inspector] of the Army

Washington,
July 5, 1844.
1. To the first query above, I answer in the affirmative to the several parts.
2. In reply to the second query above, I refer to Colo. [Colonel] Foster's letters to me (in the Adjutant General's Office) dated, respectively,
Nov. 19, 1838 &
Dec. 3, 1838.
3. I can further give a general affirmative answer to the third query above.
[Signed] Winfield Scott 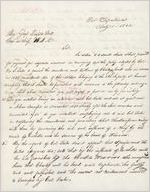