War Department Office Indian Affairs
14 November 1843
Sir,
With reference to the subject referred to in your letter of
20th ultimo -- I have to state that the claim of Abraham Utter -- against John Brown [unclear text: Senr. [Senior] ] for $34.50/100 has been referred to the second auditor for examination, and if found correct, for settlement.
Mr. Utter's claim against Hiram McCrary for $74.50. cannot now be arranged for this reason that the records of Cherokee Commissioners show that when the board adjusted the account stated with McCrary it did not reserve the amount of Mr. Utters claim but included it in that stated to be due to McCrary and to be paid [unclear text: west ] . The Cherokee Agent will be written to today and requested if he has not paid the balance stated to be due to McCrary to suspend the payment until the subject can be investigated.

received answer,
from him, 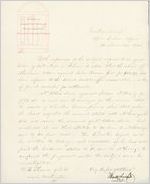