Collection:
Southeastern Native American Documents, 1730-1842
Title:
Report [with] map, 1800 May 26, Augusta, [Georgia] / Levin Wailes
Creator:
Wailes, Levin
Date of Original:
1800-05-26
Subject:
Creek Indians--Treaties
Land use
Indian agents
Surveyors
Boundaries
Location:
United States, Georgia, Jackson County, 34.1338827, -83.5663481
United States, Georgia, Franklin County, 34.3754359, -83.2291753
Medium:
land surveys
maps
letters (correspondence)
Type:
Text
Format:
text/html
image/jpeg
Description:
This is a survey report, with an attached map, pertaining to lands in Franklin and Jackson Counties in Georgia, prepared by surveyor Levin Wailes and dated May 26, 1800. The report indicates that the map is intended to show bodies of land in the two counties, surveyed separately on behalf of Daniel Beall and William Call Jr., as well as the boundaries between the state of Georgia and the Indians. Wailes asserts that the map will also reveal errors on the part of commissioners, including U.S. Agent to the Creeks, Colonel Benjamin Hawkins, who ran the boundary line from Currahee Mountain to the mouth of the Apalachee River in accordance with the Treaty of New York (signed between the U.S. and the Creek Indians on August 7, 1790). He notes various discrepancies among the surveys and indicates that the errors are unfavorable to the inhabitants of Franklin and Jackson Counties.
Digital image and encoded transcription of an original manuscript, scanned, transcribed and encoded by the Digital Library of Georgia in 2001, as part of GALILEO, funded in part by a grant from the Institute of Museum and Library Services.
Local Identifier:
tcc944
Metadata URL:
https://dlg.usg.edu/record/dlg_zlna_tcc944
Digital Object URL:
https://dlg.usg.edu/record/dlg_zlna_tcc944#item
Language:
eng
Bibliographic Citation (Cite As):
Cite as: [title of item], Telamon Cuyler, Hargrett Rare Book and Manuscript Library, The University of Georgia Libraries, presented in the Digital Library of Georgia
Extent:
5 pages/leaves
Original Collection:
Manuscript held by the Hargrett Rare Book and Manuscript Library, The University of Georgia Libraries, Telamon Cuyler, box 24, folder 23, document 01.
Holding Institution:
Hargrett Library
Rights:

[1800]
The annexed Draft is intended to exhibit the interferances [interferences] between two Bodies of Land in Franklin County, one Surveyed for Daniel Beall, the other for William Call Junior, it will also Serve to point out their connection with the present temporary Boundary line between the State of Georgia and the Indians on the Frontiers of Franklin & Jackson Counties, and to illustrate Some errors which have been commited [committed] by the Commissioners in extending the Said line from the top of the Currawhee Mountain to the source of the Apalachee River. --
Within the yellow lines is represented the Land Surveyed for Daniel Beall containing 100,000 Acres: Within the Blue lines is represented so much of the Land Surveyed for William Call as falls on the West side of the present Temporary Boundary Line; and within the Red lines is represented So much of the Land Surveyed for said Call as lies on the East side of the said Boundary line. --
It is a fact, well known to all the Inhabitants on the Frontiers of Franklin & Jackson Counties that the Superintendant [Superintendent] of Indian affairs (Colo. [Colonel] Hawkins) and the Commissioners on the part of the State of Georgia, in extending the Boundary line aforesaid, Began at the Source of a Small River which the Indians call Tulapuckee instead of the Apalachee River, that being induced to believe the Currawhee Mountain lay N.E of them the Surveyor Began his Experimental line By running N45° E, that in continuing this course, they in a few miles running crossed a considerable water course which the Indians who attended the Commissioners called the Apalachee River, that the course of this Experimental line (which is represented in the Draft by the Black line CB . and the dotted line B to D ) threw the Surveyor Several miles to the South East of the Currawhee Mountain; That he took his offset to the top of the Mountain and from the information which the running of the line of experiment was


Page: [2]
intended to give him he determined that the Course from thence to the Source of the River which he first run from was South 37° West and accordingly he pursued that Course until he intersected his first line, when he left off running and determined that from the Said Intersection (represented in the draft by the letter B ) to the Source of the river from whence he first run (a distance of about 16 Miles) the line of Experiment Should Stand for the Boundary: Thus in extending this erroneous Boundary the Surveyor has made it more incorrect by forming an angle which throws it very considerably in upon the inhabitants: Whereas a direct line as represented in the Draft by the Dotted line A [deleted text: B ] C would have embraced about 10,000 Acres of Land lying between it and the lines A:B & B:C . --
Having ascertained the situation of Thorntons Hill with regard to the Survey made for William Call, I went to the top of the said Hill with an old and experienced Woodsman (Mr. Robt [Robert] Shipley) and with my Instrument took the bearing of the Currawhee Mountain which was very plain to be Seen, and found it to bear N48° East; The distance from the Hill to the Mountain is computed to be fourteen Miles. -- Mr Shipley informs me that he has very often traveled down along the Margin of the Chattahoochee & across from that river to the Source of the Apalachee River; and he asserts that the latter actually takes its rise within the distance of three miles from the Banks of the former, and that the Chattahoochee River in its descent from the place where it is crossed by the Westernmost line of the Land surveyed for Daniel Beall (Represented in the Draft by the Letter E ) makes a course of about South 80 West, or what Mr Shipley in his own Language calls a Sunset course .
[deleted text: If Mr. Shipley is correct ] The result of [added text: my ] observation on Thorntons Hill & the judgment of Mr Shipley, convince [added text: me ] (if Mr Shipley is correct as to the Course of the Chattahoochee River) that when the Boundary Line is extended conformably to the


Page: [3]
Treaty of New York it will be properly represented by the line AF in the draft, the Course of which is South 70° West

Report of Levin Wailes of the Boundary Line 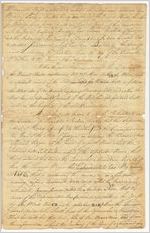