Peter Coleman of the County of McIntosh being duly sworn saith that he hath for some time [added text: past ] been concerned in receiving and delivering Forrage [Forage] for the use of Captain Armstrongs Company or Troop, or such part of them as have been stationed at the post of St. Savilla, and that he well knows that on the
third of September last the said Station was within a day or two of being out of Forage when there was the quantity of fifty one Bushels and an half of rough Rice and no more sent up to the said Station -- That the deponant [deponent] understood that Quantity served the Station 'till [until] the
eighth of the same month of September -- and no longer and the deponant [deponent] further saith that he well knows of his own knowledge so far as he was concerned, and was, yesterday was two weeks, expressly informed by Jacob Wolf who issues the Forrage [Forage] at the said station out of Forrage [Forage] from the said
eighth of September untill [until] the
twenty eighth of October following, when a Schooner


Page: [2]
belonging to Mr. Stephen Files or under his direction, arrived in the Alatamaha River with five hundred and eighty odd Bushels of rough Rice for the use of the said Station, which said Rice the deponant [deponent] says he saw and examined and that the same was not sound Forrage [Forage], but damaged Rice. and the deponant [deponent] further says that Lieutenant [unclear text: Eraudeau ] of the said Troops, informed this deponant [deponent] that when lately in pursuit of a party of Indians who had carried off some Negroes from Liberty County he certainly would have come up with them had the Horses been in fit Condition or had he had Forrage [Forage] to take out with him on the said Expedition --

[Signed] Peter Coleman
Sworn to this
10th Day of Novr. [November] 1794 Before
[Signed] Ben LLoyd J.P. [Justice of the Peace]

State of Georgia
County of Chatham

John Cole of the County of McIntosh being duly sworn saith that he was frequently at the Station of St. Savilla on the Alatamaha between the
eighth of September and the
twenty eighth of October last and heard both Officers and Men say they were entirely out of Forrage [Forage] for the Horses and make great complaints of the comissary [commissary] -- that the deponant [deponent] saw and observed the Horses belonging to the said Station -- that they were chiefly very poor and unfit for service. that the Men said several of their Horses had died for want of Forrage [Forage] . The deponant [deponent] further saith, he saw and examined a quantity of rough Rice (five hundred & odd Bushels as the deponant [deponent] was informed) which arrived in Alatamaha River about the
twenty eigth [eighth] of last month in a Schooner belonging to Mr. Stephen Files, or under his orders, which Rice was for the Use


Page: [4]
of the said Station of St. Savilla -- and the Deponant [Deponent] further saith that the said rough Rice was not sound but damaged and unfit for feeding Horses. And the deponent further saith that he saw on board the said Schooner some wheat Flour intended for the Use of the Men in the said Station and that the Comissary [Commissary] of issues on Examination refused to receive the same as being damaged Flour.

[Signed] John Cole
Sworn to this
10th Day of November 1794 Before
[Signed] Ben LLoyd J.P. [Justice of the Peace]

Mr. King, a Member of Assembly from Glyn County, I am told, knows all the facts set [unclear text: forth ] in the above affts. [affidavits] & more, to be true. 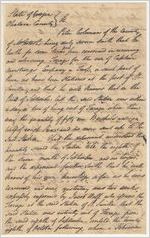