Collection:
Southeastern Native American Documents, 1730-1842
Title:
Petition of the inhabitants of Burke County, [Georgia], 1789 Jan. 28, to the speaker and house of assembly [of Georgia] / William Allen ... [et al.]
Date of Original:
1789-01-28
Subject:
Taxation--Georgia
Indians of North America--Warfare
Georgia. Militia--Appropriations and expenditures
Location:
United States, Georgia, Burke County, Waynesboro, 33.08987, -82.01567
Medium:
petitions
Type:
Text
Format:
text/html
image/jpeg
Description:
This document dated January 28, 1789 is a petition from the inhabitants of the Rocky Comfort settlement of Burke County, Georgia to the Georgia Assembly complaining of having to send payment for their specific tax, ostensibly for support of soldiers fighting unnamed Indians, to either Waynesboro or Buckhead instead of keeping it in upper Burke County.
Digital image and encoded transcription of an original manuscript, scanned, transcribed and encoded by the Digital Library of Georgia in 2001, as part of GALILEO, funded in part by a grant from the Institute of Museum and Library Services.
Local Identifier:
tcc939
Metadata URL:
https://dlg.usg.edu/record/dlg_zlna_tcc939
Digital Object URL:
https://dlg.usg.edu/record/dlg_zlna_tcc939#item
Language:
eng
Bibliographic Citation (Cite As):
Cite as: [title of item], Telamon Cuyler, Hargrett Rare Book and Manuscript Library, The University of Georgia Libraries, presented in the Digital Library of Georgia
Extent:
2 pages/leaves
Original Collection:
Manuscript held by the Hargrett Rare Book and Manuscript Library, The University of Georgia Libraries, Telamon Cuyler, box 23, folder 08, document 02.
Holding Institution:
Hargrett Library
Rights:


To the Honourable [Honorable] the Speaker and House of Assembly
The Petition Humbly Sheweth that we the Inhabitants of Rockey Comfort and the upper part of Burke County do Labour [Labor] under a Grieveance [Grievance] in Regard of Sending our Specific Tax to Waynsborough or to Buckhead which is (30 or forty miles from the before mencion,d [mentioned] upper End of Burke which in all probability for are to be dispos'd [disposed] of for the Support of our Army against the Indians and as the before Mencion,d [Mentioned] distance is a Contrary way from Where in all probability it will be wanting,
Last year we paid in Rockey Comfort Settlement and it was Brought from near the before Mencion,d [Mentioned] distance here you may be well Assur,d [Assured] we do not by this presume to oppose the Laws of our Country or Refuse to pay watever [whatever] the Legislator [Legislature] Should Inflict on us but Considering it So Very disadvantageous to our Inhabitants and Noways advanceing the the publick [advancing the public] Interest we thought it most advisable to petition to you on the Ocation Hopeing [Occasion Hoping] your Honourable [Honorable] Body will take it into Consideration and in Consequence of which we may have permision [permission] to give in where may be Considerd [Considered] Most advantageous for publick [public] & private Interest all which we Humbly Submit to Your Judicious Judgement [Judgment] and waits in Expectation that you will Condesend [Condescend] to grant the [deleted text: [illegible text] ] Request of your Hbl [Humble] peticoners [petitioners] 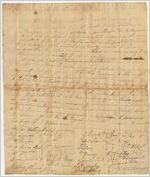