Collection:
Southeastern Native American Documents, 1730-1842
Title:
Executive order to publish certain acts of legislature, 1836 Jan. 1, Milledgeville, [Georgia] / [prepared by] R. A. Greene
Date of Original:
1836-01-01
Subject:
Creek Indians--Claims against
Cherokee Indians--Claims against
Georgia. General Assembly
African Americans--Legal status, laws, etc.
Location:
United States, Georgia, 32.75042, -83.50018
Medium:
executive orders
Type:
Text
Format:
text/html
image/jpeg
Description:
This document dated January 1, 1836 is an executive order from an unnamed governor of Georgia (probably William Schley, 1835-1837), prepared by secretary R. A. Greene, that lists a number of acts of the Georgia Assembly that are to be published in several newspapers in the state. The acts listed deal with various topics, including limits on the rights of slaves and free persons of color, changes of superior court schedules in certain counties, amendment of an act passed in December 1829 to protect frontier inhabitants from the Creek Indians, and an act to provide funding for the arrest and prosecution of Cherokee Indians under the jurisdiction of the state.
Digital image and encoded transcription of an original manuscript, scanned, transcribed and encoded by the Digital Library of Georgia in 2001, as part of GALILEO, funded in part by a grant from the Institute of Museum and Library Services.
Local Identifier:
tcc791
Metadata URL:
https://dlg.usg.edu/record/dlg_zlna_tcc791
Digital Object URL:
https://dlg.usg.edu/record/dlg_zlna_tcc791#item
Language:
eng
Bibliographic Citation (Cite As):
Cite as: [title of item], Telamon Cuyler, Hargrett Rare Book and Manuscript Library, The University of Georgia Libraries, presented in the Digital Library of Georgia
Extent:
4 pages/leaves
Original Collection:
Manuscript held by the Hargrett Rare Book and Manuscript Library, The University of Georgia Libraries, Telamon Cuyler, box 37, folder 22, document 01.
Holding Institution:
Hargrett Library
Rights:

That the Secretary of State cause to be published, in the public Gazetts [Gazettes] herein named, the following note of the late General Assembly in pursuance of the resolutions approved
December 1835 to wit
1 An act more effectually to protect free persons of colour [color] and to point out the mode of trying the right of freedom
2 An act to Compensate Magistrates and Constables in cases unprovided by law
3 An Act to appropriate the fines and forfeitures arising from Criminal prosecutions in the Counties of Warren. Troup. Gwinnett. Hancock Taliaferro, Clark and Greene. to the education of the Poor Children of said Counties
4 An Act to amend the 29th Section of an act entitled an act for ordering and governing Slaves within this province and for establishing a jurisdiction for the trial of offences [offenses] Committed by Such Slaves and other persons therein mentioned and to prevent the [unclear text: smugling [smuggling] ] and carrying away Slaves from their masters, owners or employers passed
10th May 1770
5 An Act to amend the oath to be administered at elections in this State
6 An Act to Change time of holding the Superior Courts in the Counties of Jasper and Jackson
7 An Act to repeal the second Section of an act passed
December 1832 entitled an act to make [unclear text: Bank ] and Other Corporations Subject to garnishment and to regulate proceedings against garnishes in certain Cases and to revive and declare in force the third Section of Said act
8 An Act to amend an act entitled an act to protect the frontier Settlements of this State from the intrusion of the Indians of the Creek nation, passed
20th December 1829

9 An Act to prohibit the employment of Slaves and free persons of color in compounding or dispensing of medicines in druggists or apothecaries Stores
10 An Act to establish change and regulate election precincts in the Several Counties in this State and punish those who may attempt to defeat the Same
11 An Act to amend the Several [added text: laws ] now in force in relation to Slaves and free persons of Color
12 An Act to prescribe and point out the mode of collecting coroners fees in the Several counties in this State
13 An Act to permit elections for [unclear text: colonels ] to be held at the various precincts in the Several counties of this State
14 An Act to authorize the formation of one or more Companies of Cavalry in the Several Counties in this State, and to authorize his Excellency the Governor to contract for a number of pistols Swords &c [et cetera] for the equipment of the Same &c [et cetera]
15 An Act to authorize the issuing of Grants by the State of Georgia to the fortunate drawer of all lots of land situate in the Counties of Cherokee, Cass. Cobb. Floyd. Forsythe. Gilmer Lumpkin Murray Paulding Union and Walker, which were drawn in the late land and gold lotteries, and to repeal all Laws repugnant to the Same
16 An Act to authorize the Judge of the Superior Courts in the Several Counties herein after named to audit all accounts for costs and other incidental expences [expenses] attending the arrest and prosecution of Cherokee Indians under the Criminal laws of this State and to provide for the payment of the Same
17 An Act to extend the civil jurisdiction of Justices of the Peace of the city of Savannah, and to Compel Justices of the peace and Constables of the Contry [Country] districts in the County of Chatham to be residents in the districts for which they are elected
18 An Act to alter the time of holding the Superior Courts in the County of Wayne

19 An Act to amend the Militia laws of the State of Georgia so fare [far] as relates to the first regiment of Georgia Militia and to regulate the duties and qualifications of the field. Staff Commissioners and non-commissioned officers of the Same &c &c [et cetera et cetera] and
20 An Act to Change the time of holding the Superior Courts in the Counties of Merriwether and Cobb
That the Said acts be published twice as follows: the first Sevin [Seven] in the
Federal Union Standard of Union and Southern Recorder
; the next one in the above named papers, and also in the Columbus Sentinel and Georgia Teligraph [Telegraph] ; the next nine in the
Standard of Union
,
Federal Union
,
Southern Recorder 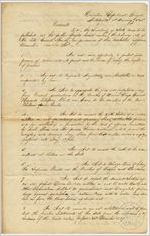