Collection:
Southeastern Native American Documents, 1730-1842
Title:
Extract from the minutes [of the] E[xecutive] C[ouncil], 1788 Feb. 4 / [prepared by] J[ames] Meriwether
Date of Original:
1788-02-04
Subject:
Indians of North America--Government relations
Camden County (Ga.)--Militia--Recruiting, enlistment, etc.
Location:
United States, Georgia, 32.75042, -83.50018
Medium:
legal documents
minutes (administrative records)
Type:
Text
Format:
text/html
image/jpeg
Description:
This document is an extract from the minutes of the Georgia Executive Council dated February 4, 1788 and prepared by James Meriwether, Secretary of the Executive Council. Among other topics, the minutes pertain to commissions for officers in the militia of Camden County (Georgia), as well as orders for the printing of various acts of the state, including an act for "suppressing the violences" of unnamed Indians.
Digital image and encoded transcription of an original manuscript, scanned, transcribed and encoded by the Digital Library of Georgia in 2001, as part of GALILEO, funded in part by a grant from the Institute of Museum and Library Services.
Local Identifier:
tcc789
Metadata URL:
https://dlg.usg.edu/record/dlg_zlna_tcc789
Digital Object URL:
https://dlg.usg.edu/record/dlg_zlna_tcc789#item
Language:
eng
Bibliographic Citation (Cite As):
Cite as: [title of item], Telamon Cuyler, Hargrett Rare Book and Manuscript Library, The University of Georgia Libraries, presented in the Digital Library of Georgia
Extent:
4 pages/leaves
Original Collection:
Manuscript held by the Hargrett Rare Book and Manuscript Library, The University of Georgia Libraries, Telamon Cuyler, box 37, folder 15, document 01.
Holding Institution:
Hargrett Library
Rights:

A letter dated 2d instant from Lieut Colo [Lieutenant Colonel] Weed with an enclosure was read
Ordered
That the Secy [Secretary] of the State prepare a Commission for Jacob Weed as Colonel John Webb as Lieut Colo [Lieutenant Colonel] Nathaniel Ashley as Majer [Major], and Alexander Young as Captain in the Regiment of Militia for Camden County- Exd [Extracted]
1 Septr. [September] 1787
Ordered
That the Secy [Secretary] of the State prepare a Commission for Robert Flourney as Captain in this State Regiment to bear date the
28 Jany [January] last. [added text (appears to be different ink and hand): Exd. [Extracted] ]
The Secy [Secretary] of the State laid before the Board the Laws passed last Session.
Ordered
That [deleted text: the ] he be directed to have the same printed as soon as possible by the State printer and that the Tax Act, the Act for regulating Trade and amending the Import Act, the Act to amend the Act for suppressing the violences of the Indians, the Act of Cession to Congress, the Act extending the time for raising supplies and the Act for the better regulating Taverns &c [et cetera] be first printed without delay.
Ordered
That the Secy [Secretary] of [deleted text: Congress ] the State prepare a [Latin: Dedimus potestatem ] directed to Thomas Harris, William Cochran, and William Green, to empower them, or any two of them, to qualify David Dixon esq as a Justice of the peace for the County of Greene
Extract from the Minutes
[Signed] J [James] Meriwether Sy E.C. [Secretary Executive Council]

Secy [Secretary] of the State 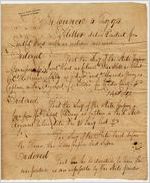