Collection:
Southeastern Native American Documents, 1730-1842
Title:
Extract from the minutes [of the Executive] Council, 1785 Oct. 11 - 1785 Oct. 14 / [prepared by] G[eorge] Handley
Date of Original:
1785-10-11/1785-10-14
Subject:
Indians of North America--Land tenure
Cherokee Indians--Government relations
Boundaries
Indian agents
Location:
United States, Georgia, 32.75042, -83.50018
Medium:
legal documents
minutes (administrative records)
Type:
Text
Format:
text/html
image/jpeg
Description:
This document consists of an extract from the Executive Council minutes which details three orders of council dated October 11, 13, and 14, 1785. The first order, dated October 13, directs that a book kept by the commissioners in charge of disposing of ceded lands be given over to the state secretary so that he can make an exact copy of it to be kept on file. The second order, dated October 14, directs the state secretary to prepare a commission for General John Twiggs to be appointed the commissioner for running a temporary boundary line between the whites and unnamed Indians. It also directs the state secretary to prepare commissions for Edward Telfair, John King, and Thomas Glascock to be appointed as commissioners to attend a meeting between U. S. commissioners and the Cherokees. The third order, dated October 11, directs the secretary of state to prepare commissions, at the request of the inhabitants of Washington County (Georgia), for various military positions.
Digital image and encoded transcription of an original manuscript, scanned, transcribed and encoded by the Digital Library of Georgia in 2001, as part of GALILEO, funded in part by a grant from the Institute of Museum and Library Services.
Local Identifier:
tcc786
Metadata URL:
https://dlg.usg.edu/record/dlg_zlna_tcc786
Digital Object URL:
https://dlg.usg.edu/record/dlg_zlna_tcc786#item
Language:
eng
Bibliographic Citation (Cite As):
Cite as: [title of item], Telamon Cuyler, Hargrett Rare Book and Manuscript Library, The University of Georgia Libraries, presented in the Digital Library of Georgia
Extent:
2 pages/leaves
Original Collection:
Manuscript held by the Hargrett Rare Book and Manuscript Library, The University of Georgia Libraries, Telamon Cuyler, box 37, folder 14, document 02.
Holding Institution:
Hargrett Library
Rights:

In Council
13th. October 1785.
Ordered, that a Book kept by the Commissioners appointed for the purpose of disposing of the Ceded Lands under the former Government now in the possession of this Board (and which may be of Publick [Public] Utility) be delivered to the State Secretary and that He do immediately take an [deleted text: [illegible text] ] exact Copy of the same to be kept of Record in his Office.


Page: [2]
appointment of Commissioners in behalf of the State to attend the meeting to be held by the Commissioners of the United States with the Cherokees and other Indians Southward of them.
Extract from the minutes
[Signed] G. [George] Handley Secy. E. C [Secretary of Executive Council]

In Council
October 11th. 1785
The Petition of Sundry Inhabitants of Richland Creek, or fifth district of the County of Washington. Certifying the appointment of Joseph Phillips as Captain, James [unclear text: Flencken ] 1st Lieutenant and William Cochran 2nd Lieutenant, for the said district and County. praying to have to Commission for said Officers agreable [agreeable] to their appointments.
Ordered, that the Secy [Secretary] of State do prepare Commissions agreable [agreeable] to the prayer of the said petition.
Extract from the minutes
[Signed] G Ha [George Handley] 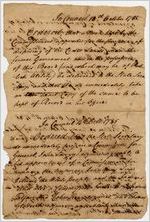