Collection:
Southeastern Native American Documents, 1730-1842
Title:
Extract from the minutes [of the] Executive Council, 1784 Mar. 23, Savannah, [Georgia] / [prepared by] L. Rees
Date of Original:
1784-03-23
Subject:
Indians of North America--Government relations
Boundaries
Surveys
Location:
United States, Georgia, 32.75042, -83.50018
Medium:
legal documents
minutes (administrative records)
Type:
Text
Format:
text/html
image/jpeg
Description:
This document dated March 23, 1784 at Savannah and prepared by L. Rees, Secretary of the Executive Council, is an extract from the minutes of said Council requiring that a copy of a resolution dated February 26, 1784 be given to the Surveyor General. The resolution, which directs the Surveyor General to survey and mark an unspecified boundary line around Indian hunting grounds, is quoted in the extract. The land set aside would be used to lay out two new Georgia counties.
Digital image and encoded transcription of an original manuscript, scanned, transcribed and encoded by the Digital Library of Georgia in 2001, as part of GALILEO, funded in part by a grant from the Institute of Museum and Library Services.
Local Identifier:
tcc785
Metadata URL:
https://dlg.usg.edu/record/dlg_zlna_tcc785
Digital Object URL:
https://dlg.usg.edu/record/dlg_zlna_tcc785#item
Language:
eng
Bibliographic Citation (Cite As):
Cite as: [title of item], Telamon Cuyler, Hargrett Rare Book and Manuscript Library, The University of Georgia Libraries, presented in the Digital Library of Georgia
Extent:
2 pages/leaves
Original Collection:
Manuscript held by the Hargrett Rare Book and Manuscript Library, The University of Georgia Libraries, Telamon Cuyler, box 37, folder 14, document 01.
Holding Institution:
Hargrett Library
Rights:

In Council /
Savannah
23d March 1784
It is ordered,
That a Copy of the Resolve of Assembly, dated
26th. February last, be transmitted and furnished the Surveyor General, And that he be directed to proceed on the said business without the least delay. --
Extract from the Minutes. --
[Signed] L Rees Secy. E. C [Secretary of Executive Council]

Copy of the Resolve aforementioned -- viz "House of Assembly
26th February 1784
Resolved, That the Surveyor General be authorized to have the line surveyed and marked, that is to circumscribe the Indian Hunting Grounds, and specified in an Act passed for laying out two Counties to the westward &c. [et cetera] and make a report of the same for the next House of Assembly -- they to make him such Satisfaction as may appear adequate to the performance."
taken and compared with the minutes of Assembly
[Signed] L Rees Secy. E. C [Secretary of Executive Council] 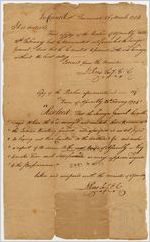