Collection:
Southeastern Native American Documents, 1730-1842
Title:
Letter, 1819 Jan. 5, Cherokee Agency [to] W[illia]m Rabun, Gov[ernor] of Georgia / Return J. Meigs
Creator:
Meigs, Return Jonathan, 1740-1823
Date of Original:
1819-01-05
Subject:
Cherokee Indians--Treaties
Boundaries
Surveys
Indian agents
Cherokee Indians--Government relations
McMinn, Joseph, 1758-1824
Location:
United States, Georgia, 32.75042, -83.50018
Medium:
official reports
Type:
Text
Format:
text/html
image/jpeg
Description:
Return J. Meigs, U.S. Agent to the Cherokees, writes to Georgia Governor William Rabun (1817-1819) on January 5, 1819 to inform the governor of his receipt of a document pertaining to a resolution of the Georgia legislature. The resolution calls for the survey of the boundary line stipulated by the Treaty of Cherokee Agency, July 8, 1817, concluded between the U.S. and the Cherokee Nation. Meigs explains that he cannot appoint commissioners for this task because he has not received official instructions from the executive, but he advises the governor that the president would most likely confirm the boundary if determined by one of Georgia's surveyors. Meigs further mentions that Tennessee Governor Joseph McMinn (1815-1821) is expected at the agency shortly, and that McMinn will be responsive to Rabun's requests.
Digital image and encoded transcription of an original manuscript, scanned, transcribed and encoded by the Digital Library of Georgia in 2001, as part of GALILEO, funded in part by a grant from the Institute of Museum and Library Services.
Local Identifier:
tcc776
Metadata URL:
https://dlg.usg.edu/record/dlg_zlna_tcc776
Digital Object URL:
https://dlg.usg.edu/record/dlg_zlna_tcc776#item
Language:
eng
Bibliographic Citation (Cite As):
Cite as: [title of item], Telamon Cuyler, Hargrett Rare Book and Manuscript Library, The University of Georgia Libraries, presented in the Digital Library of Georgia
Extent:
2 pages/leaves
Original Collection:
Manuscript held by the Hargrett Rare Book and Manuscript Library, The University of Georgia Libraries, Telamon Cuyler, box 06, folder 08, document 05.
Holding Institution:
Hargrett Library
Rights:

5th January 1819.
Sir
I have had the honor this morning of receiving your Excellencys letter of the
17th Dec. Ult. [Ultimo] covering a Resolution of the legislature of Your state approved on the 9th of that month; the object of which is to have the survey executed of the boundary lines: as stipulated by the eleventh article of the Treaty between the United States & the Cherokee Nation dated
9th July 1817. or such parts of said boundary line as have relation to the lands lying within the limits of the state of Georgia.
I have not received any instructions from the Executive Department on this subject, nor has Governor McMinn as far as I have been Informed. I cannot therefore under these circumstances appoint a Commissioner of Commissioners to carry that desireable [desirable] object into effect, to do which if in my power would give me great satisfaction. Permit me Sir to hazzard [hazard] an opinion that if that line should be run by your surveyor & reported to the president, it would be confirmed by him. I expect Governor McMinn will be here within ten days. Your communications shall be laid before him, & he will promptly comply with your requisition to me if in his power.

I have the honor to be with very great respect Your Obedient Servant
[Signed] Return J Meigs
His Excellency Wm [William] Rabun Gov. of the state of Georgia. 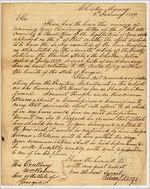