Report of the commissioners on the part of Georgia for running the boundary line between the states of Georgia and Tennessee, 1818 July 13 to W[illia]m Rabun, Governor of Georgia / J. Camak ... [et al.]


To His Excellency Wm [William] Rabun Governor of Georgia.
Report of the Commissioners on the part of Georgia for running the boundary line between the states of Georgia and Tennessee.

On the
12th. May we arrived at Nickajack. This place had been generally supposed to be near the 35th. degree North Lat. [Latitude] Upon taking observations, however, on a variety of stars, it was found to be North of it. We removed some distance South and fixed our observatory on the top of the Rackoon Mountain. After a series of observations had been taken we found ourselves a small distance south of the 35th degree. We removed our observatory northward and commenced a third series of observations. The mean of these made us still too far south. We could not remove our observatory farther to the north on account of the mountain: we therefore ascertained the required degree by a measurement due north from the place at which our last observatory was fixed, taking great care to reduce our measurement by the usual methods.
After having ascertained the point of commencement, we set up a rock to mark the place. This rock stands on the north side of the mountain, 87 chains south of


Page: [2]
the bank of the Tennessee River, and about 20 chains south of the Nickajack cave
The surveyors proceeded with the line; and arrangements were made to ascertain at Ross's where the line must pass. When the surveyors came on we found that the line had been correctly run so far.
At McNair's 48 miles from Nickajack we took observations to ascertain the accuracy of our proceedings, and found that no error had been committed.
We then extended the line to the top of the Unacoy Mountain. This being the boundary between the states of Tennessee N. Carolina we proceeded no farther.
The map which accompanies this report will shew [show] the watercourses and principal mountains over which the line passes.

Report &c. [et cetera] of the Comrs. [Commissioners] appointed agreeably to a resolution of the Legislature passed
20th December 1818. to ascertain, run and mark the boundary between the States of Geo: [Georgia] & Tennessee- 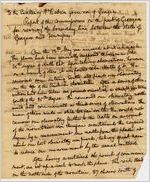