Collection:
Southeastern Native American Documents, 1730-1842
Title:
Letter[s], 1831 Feb. 28 [and] 1831 Mar. 5, Cherokee Nation, [to] George R. Gilmer, [Governor of Georgia], Milledgeville, Georgia / Edward Lloyd Thomas
Creator:
Thomas, Edward Lloyd
Date of Original:
1831-02-28/1831-03-05
Subject:
Cherokee Indians--Government relations
Boundaries
Interracial marriages
Surveys
Sturges, Daniel, d. 1823
Location:
United States, Georgia, 32.75042, -83.50018
United States, North Carolina, 35.50069, -80.00032
Medium:
official reports
Type:
Text
Format:
text/html
image/jpeg
Description:
This document contains two letters dated February 28, 1831 and March 5, 1831 from Edward Lloyd Thomas to George R. Gilmer, Governor of Georgia (1829-1831, 1837-1839), regarding the running of a boundary line up to North Carolina. In the first letter, Thomas (on behalf of himself and Alexander McGill) reports that they have had no opposition from Indians in the area (probably Cherokees), and he says that both the Indians and the intermarried whites have been very helpful. He reports that Mr. (Daniel?) Sturges has abandoned his position, fearing the difficulty of surveying the mountainous terrain in his assigned division. Thomas reports some problems and shortcomings with the survey, including some incorrect measurements given to them by the Surveyor General. In the second letter, Thomas reports on further progress and states that he encountered a great deal of difficult mountainous terrain. He mentions Sturges's departure again and asks that Sturges's partner, Mr. Owens, be given the former's compensation.
Digital image and encoded transcription of an original manuscript, scanned, transcribed and encoded by the Digital Library of Georgia in 2001, as part of GALILEO, funded in part by a grant from the Institute of Museum and Library Services.
Local Identifier:
tcc771
Metadata URL:
https://dlg.usg.edu/record/dlg_zlna_tcc771
Digital Object URL:
https://dlg.usg.edu/record/dlg_zlna_tcc771#item
Language:
eng
Bibliographic Citation (Cite As):
Cite as: [title of item], Telamon Cuyler, Hargrett Rare Book and Manuscript Library, The University of Georgia Libraries, presented in the Digital Library of Georgia
Extent:
4 pages/leaves
Original Collection:
Manuscript held by the Hargrett Rare Book and Manuscript Library, The University of Georgia Libraries, Telamon Cuyler, box 06, folder 06, document 02.
Holding Institution:
Hargrett Library
Rights:

Feb. 28th. 1831. Cherokee Nation
Dear Sir
We would have been glad to inform you of our rapid advancement in the discharge of our duties. but in consequence of circumstances beyond our power to control, we have been considerably retarded. The extreme [deleted text: ly ] coldness of the weather prevented us from setting out as soon as we expected, and after we had actually reached the place of beginning, we found difficulty in ascertaining precisely, the point designated in the Law. We have however proceeded 32 miles on the N. [North] Carolina line, and are now prepared to proceed with all possible dispatch.
The season is becoming mild, and pleasant, our company are in fine health, and provisions are obtained with conveniance [convenience] & facility.
We have not met with the slightest obstruction from the Indians. Thus far they appear anxious to promote our advantage, and even to further our operations. The whitemen (married to Indian wives) with whom we have met, manifest the greatest willingness to contribute to our comfort, and accommodation. Tomorrow we separate, one of us commencing the first Sectional line, and the other going on to the second.
Mr Sturges has relinquished his task, being intimidated we presume by the difficulty of passing over the mountains that nearly cover his division. He has appointed Mr Owens to execute his work for a stipulated price. We thought it our duty to acquaint you with the circumstances as early as possible.
We have discovered that the Surveyor General has not laid


Page: [2]
down the length of [deleted text: our Nor ] the line from the North West corne [edge of document: r ] of Rabun, to Nickajack correctly, on the plan of our apportion [edge of document: ment ] Instead of 118, we find only 110 miles, as marked by the Gen [edge of document: tle ] men who ran that line. The consequence is, that the ch [edge of document] division of the Fourth Section are extremely small, and will fall far short of the number of districts noted by the Sur. Gen. [Surveyor General] Two of these divisions have fallen to our portion, and the third, which lies between them will by no means compensate a surveyor, for his time and expense, in travalling [travelling] any distance to the work.


Mc.Nairs
5th March 1831
Dear Sir,
This day about 12 OClock I reached the Corner of the 27th. District of the 2nd Section & of the 10th. District of the 3rd. Section a distance of Sixty three miles from the N. W. Corner of Rabun County the last twenty miles of which has been verry [very] rough & hilly -- indeed I may say the upper part of the Second Section is Covered with mountains. I shall commence the line dividing the 2nd. & 3rd. Section on monday morning. it is about 60 chains East of the road leading from this place to Coosawattee. The two last nights we have been compelled lay out without our Tent, our Pack horses not being able to get to us in the mountains --
I would take the liberty to maintain that Mr. Owens & Mr. Sturges (before leaving Milledgeville) had consented to do their work together, Mr. O. [Owens] made preperation [preparation] to do so, but when reaching the Territory they have made another contract as stated above. -- Mr. O. [Owens] has done a part of the work already & unless you declare Sturges's appointment vacant & give it to Owens I fear he will not get One cent for his labour [labor] .


Page: [3]
I would also mention to you, in Confidence, that Sturges since he left Milledgeville, has passed through Eatonton, Madison, Watkinsville, Gainesville, & Clarksville, all of which places [added text: I have no doubt ] he has been saying every thing he could in favour [favor] of Thomas Hayes for next Governor for I have it from good authority that he did [added text: so ] at Some of those places. --
When he left my tent on Highwassee River the
25th. last month, he told me he intended to go on to Madison & make that his residence for a few months, I supposed until Owens had completed his work -- 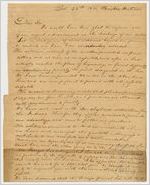