Collection:
Southeastern Native American Documents, 1730-1842
Title:
[Letter] 1799 Aug. 13, War Department, [to] James Jackson, Governor of Georgia, Louisville, [Georgia] / James McHenry, Sec[re]t[ar]y [of] War
Creator:
McHenry, James, 1753-1816
Date of Original:
1799-08-13
Subject:
Indians of North America--Government relations
Boundaries
Location:
United States, Florida, 27.664827, -81.515754
United States, Georgia, 32.75042, -83.50018
Medium:
letters (correspondence)
Type:
Text
Format:
text/html
image/jpeg
Description:
This is a letter dated August 13, 1799 from James McHenry, United States Secretary of War, to Governor James Jackson (Governor of Georgia, 1798-1801) regarding the boundary line between Georgia and Florida. McHenry says that from the information that he has received he has no reason to believe that the Indians will greatly oppose the running of the boundary line or otherwise do anything to threaten the frontier inhabitants near the line. To support his belief, he cites a reply sent from James Seagrove in response to a talk from Methlogee (?), which he says should appease all the Indians.
Digital image and encoded transcription of an original manuscript, scanned, transcribed and encoded by the Digital Library of Georgia in 2001, as part of GALILEO, funded in part by a grant from the Institute of Museum and Library Services.
Local Identifier:
tcc770
Metadata URL:
https://dlg.usg.edu/record/dlg_zlna_tcc770
Digital Object URL:
https://dlg.usg.edu/record/dlg_zlna_tcc770#item
Language:
eng
Bibliographic Citation (Cite As):
Cite as: [title of item], Telamon Cuyler, Hargrett Rare Book and Manuscript Library, The University of Georgia Libraries, presented in the Digital Library of Georgia
Extent:
2 pages/leaves
Original Collection:
Manuscript held by the Hargrett Rare Book and Manuscript Library, The University of Georgia Libraries, Telamon Cuyler, box 06, folder 06, document 01.
Holding Institution:
Hargrett Library
Rights:


War Department,
August 13th. 1799.
Sir,
I have the honor to acknowledge the receipt of two letters from you, dated the
7th. and
14th. of July ultimo.
From information I have received, and which I consider entitled to full credit, it cannot be supposed the Indians will make an opposition so serious as to threaten the frontier Inhabitants of Georgia, to the running of the Boundary line. I am happy to find this supposition much strengthened by the Extract you enclose of a letter from Major Abner Hammond to the Executive Department of Georgia.
The Indians have been practised [practiced] upon, and some of them deceived, hence partial [illegible text], and appearances of discontent. It may be presumed however, that the correct and candid Answer of James Seagrove Esquire to the Talk of Methlogee, a copy of which you enclosed, but which I had previously received from another quarter, will by the statements it contains, and the exposition of the honest views of the United States, fully appease and reconcile all the Indians.
Compensation for the Services, stated to have been performed by the Militia of Georgia, and not yet satisfied by the General Government, must await the determination of Congress, to whom I had prepared a Report at the close of their last Session, but owing to a pressure of business upon the Department, I was unable to make it so full and satisfactory as the subject requires -- I therefore concluded to defer it, to the succeeding Session and mentioned the reason to Mr. Baldwin.

I have the honor to be, with very great respect, Sir, your most obedt. [obedient] & Hble. [Humble] Servant,
[Signed] James McHenry
His Excellency James Jackson Governor of Georgia.

[ Note: A postmark appears at the top of this page.; [illegible text] ]

His Excellency James Jackson Governor of the State of Georgia. Louisville 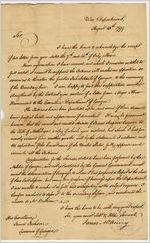