Collection:
Southeastern Native American Documents, 1730-1842
Title:
Correspondence between T[homas] Spalding and Gov[ernor] Th[omas] M[ann] Randolph, 1827 Apr. 4
Creator:
Spalding, Thomas, 1774-1851
Contributor to Resource:
Randolph, Thomas M. (Thomas Mann), 1768-1828
Date of Original:
1827-04-04
Subject:
Indians of North America
Boundaries
Surveys
Location:
United States, Florida, 27.664827, -81.515754
United States, Georgia, 32.75042, -83.50018
Medium:
letters (correspondence)
proposals
Type:
Text
Format:
text/html
image/jpeg
Description:
This document contains two letters dated April 4, 1827 between Thomas Spalding and Thomas Mann Randolph (former Governor of Virginia, 1819-1822), regarding the running of an "experimental" boundary line along the Georgia/Florida border. Writing from Thomas County (Georgia), Spalding complains about the inaccuracy of lines currently being run and notes that the new line is described as an "experimental" or temporary one, but the Indians in the area are nevertheless very alarmed by the activity. Spalding recommends that the drawing of the "experimental" line be suspended. In his letter to Spalding, Randolph responds that he is comfortable with the location of the experimental line and never really placed much value in the older lines. In order that the inhabitants might be consoled, Randolph asks Spalding to print up an explanatory circular to be distributed. He refuses to grant Spalding's request to abandon the experimental line, though he concedes that it may eventually need some changes.
Digital image and encoded transcription of an original manuscript, scanned, transcribed and encoded by the Digital Library of Georgia in 2001, as part of GALILEO, funded in part by a grant from the Institute of Museum and Library Services.
Local Identifier:
tcc768
Metadata URL:
https://dlg.usg.edu/record/dlg_zlna_tcc768
Digital Object URL:
https://dlg.usg.edu/record/dlg_zlna_tcc768#item
Language:
eng
Bibliographic Citation (Cite As):
Cite as: [title of item], Telamon Cuyler, Hargrett Rare Book and Manuscript Library, The University of Georgia Libraries, presented in the Digital Library of Georgia
Extent:
4 pages/leaves
Original Collection:
Manuscript held by the Hargrett Rare Book and Manuscript Library, The University of Georgia Libraries, Telamon Cuyler, box 06, folder 03, document 03.
Holding Institution:
Hargrett Library
Rights:

No [Number] 2
(Copy)
Thomas County
4th Apl. [April] 1827
My Dear Sir/
Mr. McBride having joined us in Camp, I beg leave to renew to you the proposition I made two days ago, that we should here suspend the Experiment Line, which can in no circumstance be any longer necessary, and I beg to submit to you some reasons in addition to those which were contained in my letter to Mr. McBride, and which letter I read to you for your approbation -- Since that time Mr. McBride has run 28 miles, and instead of diverging towards either McNeils and five chains farther from Watsons -- It is impossible therefore that we can imagine that in the scarce 40 miles which remains to be run, that his Line will diverge as far South as to unite with those Lines which are now distant from his Experiment Line. Two miles and an Eighth --
It seems to me that our difficulties have arisen from permitting ourselves to suppose, that Mr Watson & Mr McNeil ran straight Lines, & not lines describing the arc of a great circle -- The continued divergement [divergence] of Mr McBride's line from the Lines of these Gentlemen, demonstrates to my mind conclusively, that they like him, must have pursued the arc of a [added text (appears to be different hand and ink): X ] circle, and that our deviation to the North, must have arisen, in a mistaken allowance for variation, and this too is Mr McBride's opinion.
As we are to commence upon our real Line, at the Junction of the Flint & Chatahoochie Rivers, now distant but 40 miles, to proceed at once there, and take up Mr Ellicotts indicated course, before any error of any consequence at all important can have arisen, we will have reached this point when Mr McBride's Experiment Line, will serve all the purposes, for which it was originally intended, it will serve to correct and to verify our labors upon the Line. This arrestment of the Experiment Line, has become the more necessary, because we have arrived at a part of the County, thickly inhabited, and at every progressive Mile, we are filling these Inhabitants with uneasiness and alarm, for their vested rights -- It is known to us that the Line we have been running, is but an Experiment Line, and that its demarkation, and measurement, is only intended for the purpose of more readily, and more truly verifying our future Work -- but all this is not known to them, and altho' [although] we may say this to those that we may meet on our way; words are fleeting, and are perishable, while our course has been written upon the Trees, and


Page: [2]
their alarms, must and will be receiv'd [received] as soon as we have passed --
You will remember my good Sir, that from the beginning, I have been reluctant to consenting to such demarkation, and have only yielded, from the conviction in my own mind, that the Superior knowledge which you yourself & Mr McBride possess'd [possessed] upon this subject, might make that necessary, which to me did not appear so. --
This necessity however can certainly now no longer exist, and I appeal to the feelings of liberality which I have uniformly found in your bosom, for an indulgence of those feelings, which you are now sensible must exist in mine; for suppose, Sir, that by any circumstance after this Experiment Line should have been run, our work should be intercepted, and we hear rumors of Indian War at the present moment, would not the Labor that we have executed do a serious injury, by alarming all persons who are embraced within these two Lines -- might it not even generate feuds between Georgia & Florida upon the subject of their Boundaries, where now there are none?
But I trust My Dear Sir, I have said enough upon this subject; and I therefore most respectfully request your perusal of this Letter, with the Copy of the letter address'd [addressed] two days ago to Mr. McBride --

April 4. 1827
My Dear Sir/
I have considerd [considered] the subject of your letter addressd [considered] to me this morning with all the capacity I have, and with sentiments of the highest possible respect to your knowledge, judgement, and zeal to procure a just and accurate termination of our undertaking.
With respect to the Lines formely [formerly] run, I have never had much confidence in them, because they have two or three times as I understand, diverged, converged, intersected, coincided for a space, and seperated [separated] again I have conjectured that Watson follow'd [followed] the course recommended by Ellicott without making the deflection proposed by him; and that McNeils reversed the course simply, and made the deflection, but having Watsons seting [setting] out at hand as he approached the Western end, corrected by it so as to ensure the same termination -- I begin to fear with you, that our variation may not have been determined with perfect precision, but still when Mr McBride finds that, with certainty, he can make use of the Guide Line nevertheless with equal advantage --
I have approved of his putting down small temporary mile posts, with the number of miles inscribed on each, for obvious reasons, and I have no objection at all to having them removed at the joint charge as we return -- With respect to the unpleasant feelings excited in the minds of the people, as we do not agree in opinion as to the fact itself; I can not express any other sentiment than that of sorrow, that any one person settled near the Boundary, should be so affected even for a few days --
I propose to you for your consideration, to print an explanatory hand Bill at Tallahassee immediately, if there be a press there; if not, to let the Secretary employ himself in writing a number to be distributed as widely and speedily as possible.
My wish is, that this Experiment Line should be continued as begun -- It cannot make a difference in time of more than four days, if that -- We may then commence anew, at the Western Extremity upon Ellicots course if you please, with his deflections, offsetting to the end of our Guide Line, which


Page: [4]20 & 21
it seems must terminate North of the Junction, effacing [added text: it ] as we return and marking the real Boundary by mounds as well as Stakes -- I think it would not be justifiable for me to accede to your proposal to abandon a line already run 115 miles out of 155, because its course has been further North than was expected -- I trust you will consent to its continuance unchanged in any way, even if it should threaten before ended, more than at present to be wholy [wholly] unavailing --
I beg you to be assured My Dear Sir, of the cordiality and sincerity of the sentiments of Respect & Esteem, which it gives me so much pleasure to express on all occasions with regard to you -- Writing as I do now on my knees from a log. I fear my hand will be scarcely legible, -- It mortifies me extremely to be a bad penman at all times, but I am now too old to improve, in that at least, and must ask your indulgence for my inability to write better under such circumstances.

I am Dr [Dear] Sir Yr Mo Obt [Your Most Obedient] signed
[Signed] Th. M. Randolph Comr [Commissioner] &c [et cetera]
To Thomas Spalding Esqr [Esquire] Comr &c [Commissioner et cetera]
P. S. I will reply more in detail to your favor of to day as soon as it may be necessary, and I beg your indulgence for the delay -- 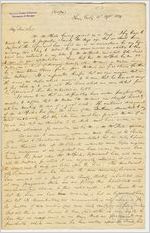