Collection:
Southeastern Native American Documents, 1730-1842
Title:
[Letter] 1827 Mar. 12, Florida Line, to George M. Troup, Gov[ernor of Georgia], Milledgeville, G[eorgi]a / Tho[mas] Spalding
Creator:
Spalding, Thomas, 1774-1851
Date of Original:
1827-03-12
Subject:
Creek Indians--Treaties
Surveys
Boundaries
Location:
United States, Florida, 27.664827, -81.515754
United States, Georgia, 32.75042, -83.50018
Medium:
letters (correspondence)
Type:
Text
Format:
text/html
image/jpeg
Description:
This is a letter dated March 12, 1827 from Thomas Spalding, a commissioner involved in drawing the boundary line between Georgia and Florida, to George M. Troup, Governor of Georgia (1823-1827). Spalding describes the great difficulty of surveying the swampy land along the boundary. He also mentions a book by Mr. Ellicott that describes the boundary line and Georgia's geography in general, and he says that the new line is parallel to the old one but falls to the north of it meaning that Georgia will lose some territory that has already been granted. He suggests that the U.S. Congress should in some way confirm the titles of land granted to people in Florida. He says that this is especially necessary since it was a U.S. treaty with the Indians (probably the Creeks) that extended the Georgia line down to Florida in the first place.
Digital image and encoded transcription of an original manuscript, scanned, transcribed and encoded by the Digital Library of Georgia in 2001, as part of GALILEO, funded in part by a grant from the Institute of Museum and Library Services.
Local Identifier:
tcc767
Metadata URL:
https://dlg.usg.edu/record/dlg_zlna_tcc767
Digital Object URL:
https://dlg.usg.edu/record/dlg_zlna_tcc767#item
Language:
eng
Bibliographic Citation (Cite As):
Cite as: [title of item], Telamon Cuyler, Hargrett Rare Book and Manuscript Library, The University of Georgia Libraries, presented in the Digital Library of Georgia
Extent:
3 pages/leaves
Original Collection:
Manuscript held by the Hargrett Rare Book and Manuscript Library, The University of Georgia Libraries, Telamon Cuyler, box 06, folder 03, document 02.
Holding Institution:
Hargrett Library
Rights:


Florida Line.
March 12. 1827.
My Dear Sir/
We have now been four days upon the Line and have been Encountering every species of difficulty, that dark and deep and impenetrable Swamps can present -- Mr. McBride has been pursuing his way thro' [through] masses of water & mire, before which every other Surveyor has heretofore shrunk, himself and his men have been compell'd [compelled] to Sleep upon Platforms of Timber cut down in the midst of the Swamp, and we have been compell'd [compelled] to provision them from the Camp, from day to day on the shoulders of our Guides; for ourselves Sir, we have suffer'd [suffered] much, but these sufferings were personal, and I could bear them, with much more patience, than I could the painful reflection, that after all of our Labor, and our difficulties are over, Georgia is destined to experience upon this Line, as in every other, disapointment [disappointment] and loss; to explain this, I must request you to take Ellicotts Book before you, when you are reading this Letter, at the Head of the 140th page of his appendix, you will see "That it was agreed that the termination of a Line supposed to be drawn north 45 degrees, East 640 perches from the mound B, shall be taken as a point to, or near which a Line should be drawn from the mouth of Flint River, which Line, when drawn; should be final -- but if upon experiment it should be found to pass less than one mile North of the said Mound, it should then be corrected to carry it to that distance" -- altho' [although] for my own part perfectly satisfied that the data upon which Mr Ellicott came to this conclusion, to wit, that the St. Mary's was fed by drains from the Okofonoke, was false, yet I felt myself compell'd [compelled] by the convention to accept of the second of these dilemas [dilemmas], as the least injurious to Georgia, to wit, that the Line should commence one mile North of the Mound B. -- And I am fearful the Evil will not here end, for if you will turn to the 115th page of Ellicotts appendix you will find, that "a mound is there fixed as a mound of observation, from which point a vista was opened, giving a view of the Junction of the Flint & Chatahoochie Rivers, and from this mound, where he made his astronomical observations by a right angled triangle, he determined the junction of these Rivers to be 260 perches North of the Mound" or more than 3/4 of a mile.
Now if the Surveyors who have heretofore run the Georgia Line,


Page: [2]
have taken the mound as their point of departure from the Westward which I am fearful they have been done, for Mr Ellicott's mounds are too distinctly, and too strongly marked to escape observation unless like the mound upon the Head of St. Marys, they had been hidden behind intermidable [interminable] Swamps, if they have taken the mound as the commencement of their Line, the present Line will be almost a parralel [parallel] one, North of every previous Line that has been run, and cutting off from Georgia a Strip of Territory equal to 140 or 150 square miles, much of which has no doubt been granted -- under the circumstances. I have detail'd [detailed] to you, I have felt in the strongest manner the responsibility of my situation, good faith and the honor which belongs to States as well as to Man, enjoined upon me the necessity of our proceeding in the Execution of the Trust reposed, without looking to the result, and I have found no consoling circumstance but one, Gov [Governor] Randolph has authorised [authorized] me to say to you, that we shall report as our opinion, the propriety, the justice, and even the necessity that exists on the part of the United States to confirm by Act of Congress the Title to the Grantees of all tracts that may be included in the Territory of Florida, for many reasons, but above all for one, that when the U. S. became the proprietor of Florida, it became the duty of the U. S. (as it was in her power) to complete the work she had began many years back, and that this duty became the more imperative when by her own Treaty with the Indians, the limits of Georgia were extended to the Florida Line -- It would give me great pleasure My Dr [Dear] Sir if I could hear from you, either at Tallahassee, or somewhere about the Junction of the Rivers, which will be weeks before we arrive at --

[ Note: A postmark appears at the bottom of this page.; DARIEN GEORGIA
Mar [March] 12 ] [added text (appears to be different hand and ink): 16 ] 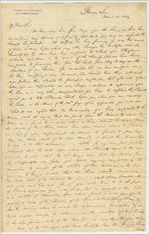