Collection:
Southeastern Native American Documents, 1730-1842
Title:
[Letter] 1819 Dec. 13, Milledgeville, [Georgia to] John Clark, Governor of Georgia / William Green
Creator:
Green, William, fl. 1819
Date of Original:
1819-12-13
Subject:
Creek Indians--Claims against
Surveys
Boundaries
Location:
United States, Florida, 27.664827, -81.515754
United States, Georgia, Early County, 31.3228327, -84.9036434
Medium:
official reports
requisitions
Type:
Text
Format:
text/html
image/jpeg
Description:
This is a letter dated December 13, 1819 from William Green to John Clark, Governor of Georgia (1819-1823). Green had been appointed by Governor William Rabun, Governor of Georgia (1817-1819), as an engineer, surveyor, and commissioner in arranging a temporary boundary between Georgia and Florida. Green reports on his progress and discusses, in particular, the troubles that he faced with Creek Indians in the vicinity of Fort Scott. He says that they had promised to send down an Indian guard to protect him and his men while they marked the boundary lines for Early County but later refused to do so. Green complains that he and his men were left at the mercy of other Indians in the area. He also states that they had trouble getting provisions and that he had been given no money to purchase certain necessities. He also notes that he has sent along a sketch (no longer enclosed) of the part of the boundary line that has been completed.
Digital image and encoded transcription of an original manuscript, scanned, transcribed and encoded by the Digital Library of Georgia in 2001, as part of GALILEO, funded in part by a grant from the Institute of Museum and Library Services.
Local Identifier:
tcc765
Metadata URL:
https://dlg.usg.edu/record/dlg_zlna_tcc765
Digital Object URL:
https://dlg.usg.edu/record/dlg_zlna_tcc765#item
Language:
eng
Bibliographic Citation (Cite As):
Cite as: [title of item], Telamon Cuyler, Hargrett Rare Book and Manuscript Library, The University of Georgia Libraries, presented in the Digital Library of Georgia
Extent:
4 pages/leaves
Original Collection:
Manuscript held by the Hargrett Rare Book and Manuscript Library, The University of Georgia Libraries, Telamon Cuyler, box 06, folder 02, document 01.
Holding Institution:
Hargrett Library
Rights:


Milledgeville
Decr. [December] 13. 1819.
Sir,
I was appointed by the late Governor, on the
15th. of last April to discharge the joint duties of Engineer, Commissioner and Surveyor for effecting the preparatory arrangements and designating a temporary boundary line between this state & the Floridas.
I left Milledgeville
23d. of same month for Fort Scott, there agreeable to instructions, to await the arrival of an Indian Guard promised from the upper Towns of the Creek Nation. After the loss of nearly a month of most critical time, it was ascertained, that the Nation not only refused to furnish the required escort, but positively prohibited their people from accompanying either me or the gentlemen appointed to lay off Early county. On the disappointments and embarrassments attending the commencement and prosecution of this business I have no disposition to enlarge, but it is perhaps my duty to add a few words on the subject. The final confirmation of the Indian Nation's refusal to furnish a guard reached me in the Neighborhood of Fort Scott. My situation, at this period was


Page: [2]
difficult and discouraging. Located in one of the most remote and unsupplied points of the State, where, at that time, not an atom of subsistence was procurable nearer than 40 miles. My people wearied and impatient, and my stock of provisions seriously diminished by the protracted delay. A guard was to be sought among a people, from many causes hostile to the object about which I was engaged. This difficulty surmounted, rations were to be obtained for the guard and also horses to convey them and that in a country, only a few months before swept of every thing by our army and Indians. I had been furnished with no funds to meet any of these contingencys [contingencies] . A line of country was to be traversed, every where from 70 to 100 miles distant from any settlement and which from the large proportion of swamp, tangle, canebrake and miry pond presents difficulties to the passage of loaded horses, beyond the conception of any one who has not visited it.
Our course was bordered by a ferocious & malignant population, restrained from hostilities against us, only by the dread of future consequences.
The shameful timidity of the men hired as guard at Fort Scott constituted the severest annoyance and the most formidable impediment I had to encounter. Their alarm became so great after leaving


Page: [3]
the fort about 20 miles, it was with the utmost exertion of entreaty and authority I forced them on as far as I did. The measures which I adopted to promote the public business and obviate impediments, as they were well and faithfully intended, I shall be much gratified if they are honored withe [with] your approbation. They are detailed in my communications to the executive between the dates
13th. May &
5th. July. The cowardice & k [added text: n ] avery of my guard together with the loss of provisions and pack horses, by the vast extent of swamp &c [et cetera] (rendered more than usually difficult by frequent & heavy rains) compelled me most reluctantly, to direct my steps towards the Ockmulgee on the
26th. of June. I just completed 62 1/4 miles abundantly & distinctly marked. Indeed in the swamps and Canebrakes there is a good practicable horse trail cut out. In
September, I again received instructions from the Governor to make the necessary arrangements for proceeding to the line & resuming my operating on it, [added text: as ] he was desirous of reporting its completion to the Legislature. It pleased the Almighty to frustrate the expectations of both -- Pressing on with anxious exertion to accomplish the instructions I had received my progress was arrested by a


Page: [4]1a
violent attack of billious [bilious] fever, from which I am yet but partially recovered. Four of my people also suffered by the same complaint. Col. [Colonel] Wood and the former Secretary Mr. Cary can furnish [added text: information ] relative to the appointment & Governor Rabun's views on the subject. A sketch of the line as far as completed and also my account accompany this communication. 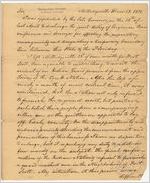