August the 1st 1794.
Sir
In consequence of a Letter written by me to Capt B: Easley respecting those of his Pay-Rolls etc. Your Excellency told me not to deliver to the Pay-Master and which agreeable to your further [deleted text: in ] Direction in the Council Chamber I laid before you the
8th of May last on the Table
I have recieved [received] an Answer that expressed his great concern, and wherein he does request of me, humbly to state to your consideration, the hardship arising therefrom to himself, and his Dragoons -- with an observation that he was prevented his wished for promptness to muster his Troop on the day appointed, by this reason meerly [merely] ; - that part of his men were engaged Volunteers to go with Major Taylor to the Cherekee Towns on that day. --
The inclosed is recopied from a Copy of General Order issued by his Brigadier respecting the same. --
Lieut Col William Melton in Greene County has directed a Regimental Muster


Page: [2]
On the 16th Instant and as he has requested my attendance on that day the same has become my wish, [deleted text: and ] [added text: therefore ] unless Genl [General] Orders from your Excellency directs me otherwise I shall proceed from Burk County to Greenesborough for that purpose

I have the honor to be with due Observance Your Obedient Adjt Genl [Adjutant General]
[Signed] Augustus C: Geo: [George] Elholm
His Excellency George Mathews Governor and Commander in Chief. 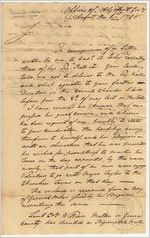