January 24, 1830.
His Excellency
George R. Gilmer
Governor of Georgia.
Sir
I have the honor to acknowledge the receipt of the Resolutions of the General Assembly of Georgia on the subject of the amendment to the Constitution of the United States proposed by the States of Louisiana, Missouri &c. [et cetera]
I avail myself of this occasion to inform you that the Report of Genl. [General] Coffee of Alabama on the Creek and Cherokee Line has reached the War Department. Mr. Secretary Eaton gave me a sight of the map transmitted and offered me the perusal of the Report &c. [et cetera] I have not yet had time to avail myself of this offer. According to the map and Mr. Eaton's statement of the substance of Genl. C [General Coffee] 's Report, the true line between the Tribes should begin


Page: [2]
at the Shallow ford on the Chattahoochie and flow circuitously on their ridge a range of hills to Wills' Creek. This line cuts off from the Cherokees about one third of the territory believed by us, according to the evidence before the State Executive, to belong to the State under the Creek Treaty of
1827.

I have the honor to be Your obt Servt. [obedient Servant]
[Signed] John Forsyth 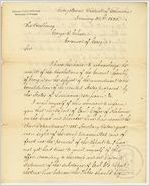