Collection:
Southeastern Native American Documents, 1730-1842
Title:
Translation of the answer given by his Excellency the Governor of his most Catholick [sic] Majesty's Province of East Florida to a letter from his Excellency the Governor of the State of Georgia, 1787 Dec. 10, St. Augustine, [Florida to] George Mathews / Vincent[e] Manuel de Zespedes
Creator:
East Florida. Governor (1784-1790 : Zespedes)
Date of Original:
1787-12-10
Subject:
Creek Indians--Warfare
United States--Foreign relations--1789-1797
Florida--History--Spanish colony, 1784-1821
Location:
United States, 39.76, -98.5
Medium:
letters (correspondence)
Type:
Text
Format:
text/html
image/jpeg
Description:
This is an English translation of a letter from Vincente Manuel de Zespedes, Spanish Governor of East Florida (1784-1790), to Georgia Governor George Mathews (1787-1788, 1793-1796), dated December 10, 1787, in which Zespedes responds to a communication from Mathews. Zespedes acknowledges the war between Georgia and the Creek Nation, recently begun, and assures Mathews that the Spanish governorship desires friendship with the United States. He explains that his people once lived in fear of "the savages", but now enjoy peaceful relations with neighboring Indians, having actively pursued such amity. Zespedes admits that the Spanish have supplied Indians (ostensibly Creeks) with arms and ammunition, but contends that these gifts were intended for hunting and in quantities too small for waging war. He states further that he will continue such gift-giving because it is integral to the amicable relationship existing between the Spanish and Indians. Zespedes mentions that James Seagrove has recently visited.
Digital image and encoded transcription of an original manuscript, scanned, transcribed and encoded by the Digital Library of Georgia in 2001, as part of GALILEO, funded in part by a grant from the Institute of Museum and Library Services.
Local Identifier:
tcc734
Metadata URL:
https://dlg.usg.edu/record/dlg_zlna_tcc734
Digital Object URL:
https://dlg.usg.edu/record/dlg_zlna_tcc734#item
Language:
eng
Bibliographic Citation (Cite As):
Cite as: [title of item], Telamon Cuyler, Hargrett Rare Book and Manuscript Library, The University of Georgia Libraries, presented in the Digital Library of Georgia
Extent:
4 pages/leaves
Original Collection:
Manuscript held by the Hargrett Rare Book and Manuscript Library, The University of Georgia Libraries, Telamon Cuyler, box 03, folder 27, document 03.
Holding Institution:
Hargrett Library
Rights:

Sir
In answer to your Excellency's letter of the 6th ultimo, and Documents it inclos'd [inclosed] expressive of the disagreeable Event of a War having commenc'd [commenced] between the State of Georgia and the Creek Indians. I have the Honour [Honor] to assure you that I perfectly sympathize with your Excellency in sincerely desiring to promote, to the utmost of my Abilitys [Abilities] the good understanding and Amity that happily subsists between my royal Master and the United States of America, consequently it will afford me singular pleasure to concur in every reciprocal measure conducive to the improvement and consolidation of that Friendship which, on account of Neighbourhood [Neighborhood] ought to be more especially cherish'd [cherished] between Georgia and East Florida.
The shocking manner in which the Savages inflict Death on the unfortunate Victim, who fall into their hands, must undoubtedly excite Horror in every civilis'd [civilised] [civilized] Bosom, particularly in those of my Countrymen, many of whom actually here were formerly Witnesses of suchlike Crueltys [Cruelties] perpetrated on their dearest connections: However on the late surrender of the Province to his Majesty the antient [ancient] inveteracy of the Indians had subsided and We found them disposed to Peace; of Course the


Page: [2]
paternal care of my Sovereign for the Tranquillity [Tranquility] of his Subjects, sound Policy and even Humanity pointed out the propriety of cultivating that disposition by adopting the same line of conduct with regard to them, as had been practis'd [practised] [practiced] with success by the English and anteriorly by the French: with this view from my first arrival in the Province they have receiv'd [received], scalping Instruments excepted, presents similar to those bestow'd [bestowed] by the aforesaid Nations of which Ammunition for hunting composes a part, but this is given a quantity so small that I am convinc'd [convinced] it is entirely inadequate to the purposes of Carrying on a War.
This, Sir, is a true statement of my interference with the Indians which I have been the more induced to give on account of the certainty I possess of the Amical [Amicable] disposition of his Majesty towards the American Nation, and Candor, as well as my particular Respect for your Excellency's character, leads [added text: me ] to farther inform you, that without an express order from my Sovereign, to whom I shall report your Letter. I cannot alter my conduct moreover, as the very small supplys [supplies] of Ammunition, which as I observed above, the Indians receive from this Government, have been occasionally furnish'd [furnished] to them ever since I took possession of the Province /consequently long before even a remote Idea had been form'd [formed] of a rupture between them and the state of Georgia/ a continuation of the customary presents,


Page: [3]
far from being oppos'd [opposed] to the Law of Nations, is dictated by that of Nature and reason, on which the former is founded, for a discontinuation might probably cause to my royal Masters Subjects if not at present, on some future day all those Evils with out any aliviation [alleviation] of them, which to my great sorrow. Sorrow Georgia actually suffers) that the Spaniards formerly experienc'd [experienced] from the Savages in this very Province.
It is with particular pleasure that I acquaint your Excellency that Mr. James Seagrove, the Gentleman whom you were pleas'd [pleased] to honour [honor] with your Commission, has given universal Satisfaction here, in fact his good sence [sense] and affable demeanour [demeanor] would have increas'd [increased] if necessary, the desires which his Majestys subjects in this Province as well in obedience to the royal Pleasure, as prompted by their own inclination have entertaind [entertained] from the beginning to cultivate a friendly understanding with the Citizens of Georgia by every mutual act of attention and good neighbourship [neighborship] which may be compatible with [added text: the ] Laws of both Countrys [Countries] .

God preserve your Excellency many happy years
St. Augustine
December ye. 10th 1787
=your Excellency's hand is kiss'd [kissed] by your assur'd [assured] respectfull [respectful] Servant=
[Signed] Vincent Emanuel de Zespedes =his Excellency George Mathews =P:S:=After this letter had been written, Mr Seagrove inform'd [informed] me that possibly your Excellency might not have at hand a person to putt [put] it into English therefore at Mr. Seagroves


Page: [4]
request I directed Captain Howard, his Majesty's secretary for this Province to Make out the Translation which I inclose you. 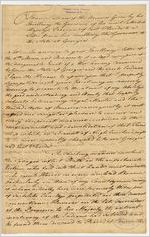