Tallahassee Flo. [Florida]
2. Feby. [February] 1836
Sir
Under present existing excitements, & that they may be allayed, Mr. [unclear text: Walker ] Sec [Secretary] of the Territory, has consented to proceed to Milledgeville, & in person to confer with you, as to those Military operations which the present crisis demands. [unclear text: To him ] I beg to refer you, for all the information which can be communicated.
I am busily engaged in endeavoring to get an adequate force to the field; but things are moving [illegible text], & with no indication to inspire any thing of sanguine [unclear text: hope ] . Five or six hundred are called for, being about a fifth of the active male population of the Territory. Added to this, there are about 400, more on the frontier, which is nearly equal to &frac25; of the population subject to Militia duty. Georga, [Georgia] can more easily supply 5,000 men, than this Territory can furnish 500; the population of yr. [your] State, being more than ten times what the [unclear text: numerical ] force here is.
Florida has a large Frontier, exposed, & to be protected; & while I believe there is no necessity for guarding it, after an adequate force takes the field, still to satisfy public fears & public demands, a force must be retained. To protect the frontier, against Indians, there is but one [unclear text: salutary mode ], & that is, to march directly into their Country. But I will furnish a force of 5 or 600; more is hardly to be reckoned upon; the rest [added text: of our defence [defense] ] must repose on you; and without you, nothing effectual can be done.
The Sec [Secretary] of War, says, that Genl. [General] Clinch is authorised [authorized]


Page: [2]
to make the necessary requisites upon the Gov of Georga [Georgia] & Florida. In a despatch recently recvd. [received] he says he wants 3,000 militia. The force he can command now, is say [unclear text: 200 ] regulars at his own post Camp King, & the Florida volunteers [unclear text: limittedly ] in service (about 250) At Tampa, with which all [added text: his ] communication has for some time been cut [added text: off, ] there are reported, 250 regulars, & 120 frendly [friendly] Indians; in all, 370

Three sloops of war, Vondalia, St. Louis, & Constellation are there, or near, what might supply perhaps 330
making an agregate [aggregate] force of 700
I propose to dispatch the troops from here, say 550} 1250


Now if you could hasten 10 or 1200 men to Camp King; [deleted text: [illegible text] ] by a move thence to be made, & at the same time [deleted text: [illegible text] ] [added text: a similar one ] from Tampa, [added text: to be made ] a junction could be effected in two or three days; & the Indians in that region of Country, would certainly be intercepted. It is the only voluntary move known to me, that can be made. To effect this, you need not delay for supplies Enough to reach Tampa, is all that is required. There ample supplies will be sent. The quantity, already there, & that which I have, will feed 3000 men for 30 or 50 days, leaving ample time to procure more. The troops destined for this service are now gathering; & each mail, I have expected to hear from you, that I might determine on the march to be made. I cannot send them to Tampa, without your certain co operation [cooperation] after the mode & plan of operation proposed; if that cooperation, [deleted text: & as is suggested ] [added text: & after the manner I have suggested ], cannot be had, our plan must


Page: [3]
be purely defensive, & to guard the frontier well as may be possible; for with so small a force, nothing aggressive can be attempted; & a larger [deleted text: force, ] can not be procured here
The Florida troop are gathering to this point, & on their service is limitted [limited] to four months, it is all important, for, expedition to be practiced. Vessels are at hand to convey them to Tampa the preferred [unclear text: port ] . I only wait for information from you, and the arrival of our arms (expected tomorrow [deleted text: ) ] or next day) to decide upon [deleted text: our ] the course, we shall pursue, & ought to pursue speedily. I must entreat the [unclear text: four ] of you, to act in this business with all the energy, & promptness that you can practice 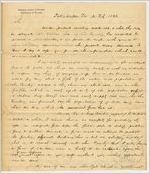