Tallahassee.
25 Jany. [January] 1836
Dr Sir
On the return of Genl. [General] Brown, I had the satisfaction to learn that, far as practicable, arrangements were making by you, to [illegible text] a force to the field
Saturday & to day, the force from this Territory will be organised [organized], & soon as arms are recd [received], they will be ready to move.
I desire that we may act in concert; & to this end I shall be glad speedily to hear from you -- The force which will proceed hence, added to the Regular troop -- frendly [friendly] Indian force, & marines from the Pensacola sloops of [illegible text] amount to 10, or, 1200. Genl. [General] Clinch has about 200 regulars at Camp King. [unclear text: Now ] 8 or 10 hundred from [unclear text: Georgia ] will give him an efficent [efficient] force. If that force could rendesvouz [rendezvous] at Camp King Genl. [General] Clinch Head Quarter; & the force from this Territory hasten to Tampa Bay, in two days or three a junction could be effected, & the whole of Withlacoochee [unclear text: tribes ] would be cut off. Genl. [General] Hernandez has been written to, that the eastern passes along the St Johns be carefully watched. Your portion of troops advancing on Camp King must be supplied up the St Johns River from Savanah -- Let the troop take only 8 or 10 days of supplies, [added text: on leaving the Geoga [Georgia] frontier ] lest there [their] coming by St Johns be cut off, & then, care will be taken that an amply supply be [unclear text: thrown ] into Tampa: already there are plenty of provisions there


Page: [2]
& these are increasing. I pray [added text: you ] apprise me by every mail what is doing, that our troops may not [unclear text: have to ] act, but in concert. It is important that they should do so, to render effectual the blow that is to be stricken -- --
Clinch is a Brevet Briga. [Brigadier] By the laws of the US, he will command any officer of the militia not above the rank of Brigadier. To Keep down all [unclear text: heart ] burning, it may be advisable that you send no officer of higher rank than Brigadier Genl. [General]

JAN 25
A postmark appears on the upper left of the page.
18} 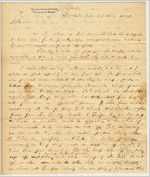