9. Jany. [January] 1836
Dr. [Dear] Sir
I wrote you by last mail an accont [account] of the recent battle had with the Indians.
To day [Today] genl. [general] Brown adjutant genl. [general], of this Territory proceeds to your State (Augusta) to endeavor to obtain arms, &c. [et cetera] I have written to the Sec [Secretary] of War for an order to the arsenal officer at Augusta. My letter tho [though], is but two days in advance, & hence am I greatly in hopes, that under the exegencies [exigencies] of the case, the officer at the arsenal will act at once. Will you do me the favor, to give general Brown a letter, urging this matter- Your influence may & will greatly assist him.
We have no arms, that can be serviceable; & [unclear text: in that ] our population is extremely sparse, & not numerous Emboldened by their recent fright, the Indians may make their assaults upon our frontier, and upon yours. True policy then suggests, that the war be prosecuted in their own limits, as the most effectual mean of keeping them at home; and true economy points to the necessity of sending a strong force at once to overawe these people. The war prevailing on yr. [your] frontier, may it not give you a power to call upon the militia, ready to unite at some agreed point, say the Suwannee, on a day to be fixed upon. If you distrust the exercise of this power, an encouragement on your part for volunteers would no doubt induce many to turn out. Should you conclude to act I pray you let yr. [your] troop be speedily raised, ready to march soon as concert can be gone into

I enclose you a report of Brigr. Genl [Brigadier General] Call touching the state of affairs & the recent fight with the Indians -- 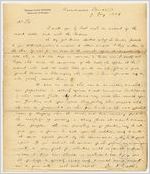