Tallahassee
8~ January 1836
Sir
The term of service for which the volunteers for Middle Florida engaged, having expired they are now on their return march to this place where they will be discharged. They have made a most active and fatiguing expedition, They have rendered faithful, and important service, We found the enemy in possession of the Country for thirty miles above the Indian boundary. The inhabitants had abandoned their homes and were collected in a few small forts Constructed in the different neighborhoods. The Indians divided into small bands, were spreading desolation over the whole land. The prompt and rapid march of the troops under my command soon routed and drove them within their own limits
Having accomplished this important object, the disposable regular force under the Command of Genl [General] Clinch, consisting of about 200 men, was united with the Volunteers at Fort drane, from [added text: whence ] we resolved to make a rapid movement into the enemies Country and attack them in their towns. The volunteers from Middle Florida had at that time [deleted text: only ] [added text: but ] four days to serve; and we were able [deleted text: only ] to carry with us only a sufficient supply of provisions and forage for that period. Our guide had Informed us that in two days march we should arrive at the Withlacooche River at a point where it might be easily forded. On the morning of the
31st December, we marched from Camp before day, And soon after It was light


Page: [2]
We arrived at the bank of the river, Where we were greatly surprised to find instead of a ford over which to pass we had to encounter a deep and rapid stream, with no other means of crossing than that of an Indian Cannoe [Canoe] found at the Oposite [Opposite] Side the regulars crossed first, and When a very small portion only of the volunteers had gained the op [added text: p ] osite bank, the Indians a large body, commenced a spirited and unexpected attack, which continued for some time, During the fight the volunteers continued to cross the river and support the troops engaged, until the enemy was driven back, It Was owing to the appearance in the field and the galant intripidity [gallant intrepidity] with which they faught [fought], that the regular troops were not entirely cut off. It was to them as Well [deleted text: as well ] as myself a source of deep mortification and regret that so few of us should have [deleted text: able ] [added text: been enabled ] to participate in the danger and glory of the day, but from the time of attack and the circumstances under which It was made, it was unavoidable, I crossed the river myself during the fight. and did not arrive in the field until it was nearly ended.
Col Parkhill and Col Read were in the staff of General Clinch They with my aid de camp Maj Willfords were among the foremost in the field and were [deleted text: gr ] gr [added text: e ] atly distinguished for their bravery and usefulness during the fight, The loss of the enemy is unanimously estimated at from 40 to 60 killed.
Our loss was four killed and fifty nine wounded Among the latter was Capt Graham, And Lieut, [deleted text: [unclear text: Ridgely ] ] Campbell Graham, And Lieut Ridgeley of the Regular troops, Col John Waren Maj Cooper and Lieut [word(s) omitted] of the volunteers. None of the wounded of the [deleted text: volunteers ] officers are considered dangerous except Maj Cooper He was shot through the lungs, but hopes are


Page: [3]
entertaining of his recovery.
The number of our wounded and our want of supplies, to enable us to proceede [proceed] further into the Country Compelled us to recross the River, This was successfully done about Sun down in the presence of the Enemy. Who appeared to have been reinforcing the whole day. The volunteers found the right and left flanks resting on the river above and below the landing. The Regulars formed the center part of the line uniting with the volunteers. The enemy formed a line some distance from the Covering our whole flank. The war-hoop was repeatedly given a long [along] the line, And we are in momentary expectation of an attack while recrossing the river on a log, Which in the course of the evening had been prepared. for the purpose, We encamped at dark on this side of the River under the sounds of the war hoop. but the enemy had suffered too severely to renew the attack, and the next day we returned with our wounded to Fort Drane. 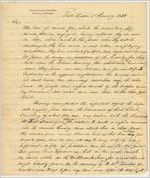