Collection:
Southeastern Native American Documents, 1730-1842
Title:
Letter, 1816 Sept. 24, War Department, [Washington, D.C. to] David B. Mitchell, Governor of Georgia, Milledgville [i.e., Milledgeville, Georgia] / W[illia]m H. Crawford
Creator:
Crawford, William Harris, 1772-1834
Date of Original:
1816-09-24
Subject:
Creek Indians--Government relations
Roads--Maintenence and repair
Location:
United States, Georgia, 32.75042, -83.50018
Medium:
letters (correspondence)
Type:
Text
Format:
text/html
image/jpeg
Description:
On September 24, 1816, William H. Crawford, U.S. Secretary of War, writes to Georgia Governor David B. Mitchell (1809-1813, 1815-1817) concerning road repairs and maintenance. Crawford informs the governor that Congress appropriated funds for internal improvements, but since the allotment is insufficient, troops will be needed to work on the roads. He acknowledges that it may be unwise to place small troops on road repair duty because relations with the Creek Indians are somewhat antagonistic. However, Crawford believes that aggressive tendencies among some of the Creeks have subsided, and the destruction of the "Negro Fort" on the Apalachicola River in Florida has intimidated them. For this reason, Crawford suggests to Mitchell that some of the troops stationed in Indian territory should be transferred to the road project, and he asks the governor for information and advice.
Digital image and encoded transcription of an original manuscript, scanned, transcribed and encoded by the Digital Library of Georgia in 2001, as part of GALILEO, funded in part by a grant from the Institute of Museum and Library Services.
Local Identifier:
tcc723
Metadata URL:
https://dlg.usg.edu/record/dlg_zlna_tcc723
Digital Object URL:
https://dlg.usg.edu/record/dlg_zlna_tcc723#item
Language:
eng
Bibliographic Citation (Cite As):
Cite as: [title of item], Telamon Cuyler, Hargrett Rare Book and Manuscript Library, The University of Georgia Libraries, presented in the Digital Library of Georgia
Extent:
4 pages/leaves
Original Collection:
Manuscript held by the Hargrett Rare Book and Manuscript Library, The University of Georgia Libraries, Telamon Cuyler, box 03, folder 05, document 02.
Holding Institution:
Hargrett Library
Rights:

24th. Sept. 1816.
Dear Sir,
An appropriation of ten thousand dollars, was made, during the last Session of Congress for the purpose, of repairing and Keeping in repair, the road from Fort Hawkins to Fort Stoddart, and another road from Columbia in Tennessee to Madisonville in Louisiana.
The Smallness of the sum appropriated, compared, with the expence [expense] of putting those roads in a proper State of repair, especially as to bridges renders it necessary, that the troops Should be employed in that Service in aid of the appropriation. The uncertain State of our relations with the Creek Indians during the Spring and Summer has rendered it imprudent to expose Small bodies of troops, in repairing this road, as it might have invited aggressions, to which Some of the Indians were Known to be Stongly [Strongly] predisposed. As the hostile disposition of the Creeks appears to have in some degree Subsided, and as the distruction [destruction] of the Negro Fort on the Appalachicola, may have a tendency to intimidate them, it is probable that a part of the troops Stationed in the Indian Country may now be safely employed in this work.
Your residence in the vicinity of the


Page: [2]
country through [added text: which ] the road passes, and the means you possess of obtaining information from the persons who have lately travelled it, will enable your Excellency to inform me of the present State of the road, and the probable quantum of labor which will be required from the troops in aid of the appropriation, to put it in the best State of repair.
I will also thank your Excellency for any information which it is in your power to give, as to the best mode of laying out the money appropriated.
Whether it will not be advisable to employ a number of mechanics by the day, who shall proceed with the troops, and shall be employed exclusively in the construction of the necessary bridges, aided by Such of the Soldiers, as may understand enough of the mechanical arts, to be useful to them. Not Knowing the number of dimentions [dimensions] of the bridges, which ought to be built, I am unable to form any opinion of the adequacy of the Sum to that object. If all the bridges that are necessary can be erected for five thousand dollars, it would be proper to have them built by contract.
I perceive from the Postmaster Generals' advertisement that the mail goes three times a week between Nashville and Nachez, and but once a week between Milledgville and Fort Stoddart.

This is neither consistent with the public interests, public convenience, or strict justice.
There is more travelling done on the latter rout [route], and the profits of the mail cannot fail to be as great as in the former.
The Subject ought to be attended to.

I have the honor to be, Your most Obedt. [Obedient] & very humble Servt. [Servant] -
[Signed] Wm [William] H Crawford
His Excellency, David B: Mitchell Governor of Georgia Milledgeville. 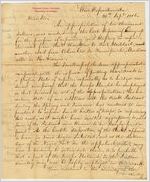